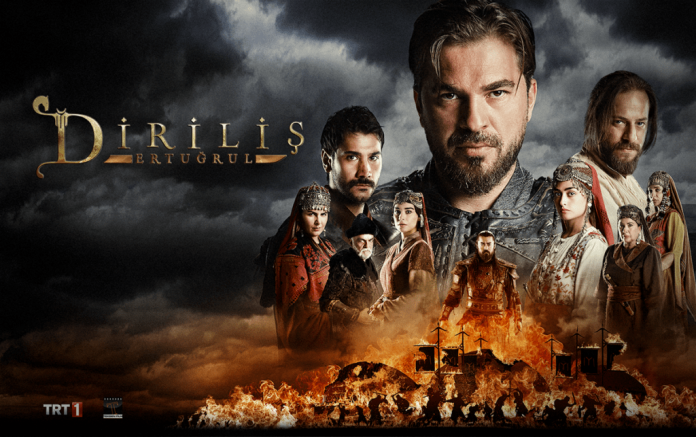 At the start of Dirilis Ertugrul Season 2, Ertugrul Bey was very happy to know that he is becoming a father. While Ertugrul and Halime were talking, the Mongols attacked them. Halime Sultan ran from there but Ertugrul was captured and they took him to Baycu Noyan. When Halime returned to the kayi tribe, she saw everyone killed. The Mongols burnt the rugs of kayis. The people who survived the Mongols attack went to another plain. When Gungogdu bey reached Caravanserai along with other beys, he saw clouds of smoke rising from there. Gundogdu bey informed the tribe that Ertugrul bey was no more. Ertugrul bey was forced to work for Mongols by Baycu Noyan, but he denied. Ertugrul Bey tried to run from Mongol prison at night but they realized it and start chasing him. Gundogdu bey and his Alps were wandering in the search Ertugrul, they were attacked by the Mongolian soldiers. Tugtekin suspected the Alps and expelled them from the tribe. Ertugrul bey was rescued by a man named as Geyikli and he brought the expelled Alps to Ertugrul. Ertugrul reached to the tribe and called for a Toy. In Toy, Ertugrul asked the beys to be in war with Mongols, but Tugtekin rejected it. Ertugrul Bye’s hand was wounded badly and he was no longer an alp.

Ertugrul bey got angry with Halime sultan for what she told him. In the tribe, Alps started fighting with each other. Dogan alp and Turgut alp lost their positions after Ertugrul Bey. Abdurrahman was sent to Noyan`s location by Ertugrul. Gundogdu bey fought with Ertugrul bey for putting the tribe in risk. In Dirilis Ertugrul Season 2, Ertugrul bey tried his level best to convince his brother for war against the Mongols but Gundogdu bey denied. Some of the kayi Alps met with Mongols for the seek of money. The merchant who has to trade with Gundogdu bey was killed by Mongols. Tugtekin went after the disloyal Alps. In Toy, a death warrant was issued for Abdurrahman. The kayi Alps who worked for the Mongols captured Ertugrul and then let him go.

Ertugrul bey and Tugtekin were fighting, but Hayme Hatun stopped them. Kayis Alps refused to execute Abdurrahman and dropped their weapons. On the same night, Abdurrahman was abducted from the prison tent. Ertugrul was sent out by Hayme Hatun to bring the peace in the tribe. Abdurrahman went to Geyikli cave undercover. Meanwhile, Noyan was planning to put both the Kayi and Dodurga tribes in trouble. Abdurrahman obeyed Ertugrul’s orders and joined Mongols. Ertugrul bey secretly met with Ibn Arabi.

Ertugrul bey came to know that his brother SungerTekin was spying for the Sultan Alladin. Later on, Noyan got the news that SungerTekin was a spy. Meanwhile, Ogedai khan was coming to Anatolia. Ertugrul was held responsible for the attack on Ertokus bey`s soldiers and it caused tension and unrest in Toy. The death sentence of Ertugrul bey and his Alps was brought by Gumus Tekin from Konya. Noyan tried to send Ertokus bey to Ogedai khan but Ertugrul tried his level best to find him. Mongol soldiers attacked Ertokus bey and Ertugrul defeated them. But a Mongol agent shouted an arrow to Ertokus bey. Ertokus bey conveyed the information to Ertugrul bey before his death. In Dirilis Ertugrul Season 2, Ertugrul bey got the information and started secret planning to travel to Konya. Ertugrul bey and Tugtekin could not stop each other and fought again. Ertugrul bey defeated Tugtekin but he did not kill him. Baycu Noyan could not stop himself anymore and attack. Gokce Hatun was slapped by her elder sister Selman Hatun. Noyan met with Tugtekin and he hurt him badly. Noyan throw him to the cave so that Ertugrul will be held responsible for this. Artuk bey, knowing all this informed Ertugrul bey about the situation.

Situation was not suitable for Ertugrul as everything was going against him because of the Mongolian spy’s in the plain. Ertugrul bey could not stand with the situation anymore, he returned to the tribe and killed the Mongolian agent. Hayme hatun was wounded. Bamsi alp along with the other Alps found out the Tugtekin unconscious. Ertugrul bey willingly went to the cage tent with his own assent. On the same night Mongols attacked them, Halim sultan escaped from there successfully and took her way to Konya with the help of an unknown person. Ibn Arabi took Tugtekin hidden to save his life.   Ertugrul bey was brought to the court because of calumny against him and the death sentence was issued against him. But Ertugrul bey was rescued by his Alps when they try to execute him.  At last, Tugtekin was brought to the plain and every fact was open. Some people were appointed to kill Halime Sultan in the Palace by Noyan. When Ertugrul got this news he left for the palace with immediate effects.

In Dirilis Ertugrul Season 2, They decided that for their survival they have to stop Mongols and the only possible way to tackle Mongols was to attack their capital. Meanwhile, the Mongols discovered that Abdurrahman was spying for Kayis so they arrested him. In Dirilis Ertugrul Season 2, They kayis planned to attack the Mongols under the authority of Ertugrul bey. Sunger Tekin slinked into the caravanserai and informed Ertugrul bey about his role against the Mongols. But Noyan was also there in the caravanserai along with his Alps, he set a plan to trap them and took the seal of Oghuz khan from Sunger Tekin. Meanwhile, Tugtekin along with other beys attacked the Mongolian capital place. Ertugrul bey took the seal from Noyan by injuring him, but Sunger Tekin was wounded seriously.

Selman Hatun was abducted by the traders who work for Mongols. Noyan demand seal in return of Selcan Hatun but Gundogdu bey failed to find out the seal. Sunger Tekin knew that the seal was missing. Then Artuk bey made a fake seal on the demand of Gundogdu bey and Sunger Tekin. A dervish named Kirmani awarded Ertugrul with a large amount of gold for saving him.  Gundogdu bey got back Selcan Hatun in return of Fake seal. During that swap Hamza attacked Noyan but failed to kill him. Noyan killed Hamza. In Dirilis Ertugrul Season 2, Gundogdu bey attacked Noyan and captured him in wounded condition. Gundogdu bey brought the Noyan to the tribe. Saadettin Kopek reached and stopped the execution of Noyan when Kayis were executing Noyan. When Noyan got freedom, the Mongols start fighting with each other. Sunger Tekin and Tangut attacked Noyan and tried to kill him, but failed and they killed Tangut.

Banu Cicek was blamed for poisoning Korkut Bey. The people who were desirous of power could not wait anymore. Kurkut bey died and Tugtekin was elected as the new Bey of the Dodurgah tribe in the Toy. Tugtekin was told about the suspicious deaths of his mother and father by Selcan Hatun.The abduction of Banu Cicek angered Tugtekin and contorted him with Ertugrul. Saadettin Kopek and Gumustekin Bey continued their secret plans. Saadettin Kopek asked for new border territory and this task was given to Gumustekin Bey. Everyone was amazed at this unexpected decision. Banu Cicek was declared innocent by the mercy of Selcan Hatun.

Ertugrul Bey knew about the betrayal of Gumustekin bey and he caught him. When the news of Gumustekin capture reached Saadettin Kopek, he immediately went to the plain. Aytolun and Gumustekin were found culpable in the court. Now, Once again Saadettin Kopek tried to stop the execution but Ertugrul did not listen to him and execute Gumustekin Bey. In Dirilis Ertugrul Season 2, Saadettin Kopek could not bear it and decided to Cooperate with Mongol leader Noyan to kill Ertugrul. Goncagul was also indulging in this betrayal unity. Shehzade Yagit and Dundar Bey were about to return to the tribe.

In Toy, Ertugrul bey declared that it’s time to move towards the Byzantine border. Noyan trapped Shehzade Yagit and Dundar bey while they were on the way to the tribe. Noyan presented himself as Sultan in front of Shehzade Yagit and tried to deceive him. Dundar bey was rescued by Saadettin Kopek. The Mongols captured Turgut alp but Sultan Yagit saved his life. Meanwhile, Halime Sultan gave birth to a son of Ertugrul. Saadettin Kopek delivered the news of death order against Shehzade Yagit to the tribe. Shehzade Yagit informed his sister Halime Sultan with the truth through a letter. Turgut alp was released later. Gokce Hatun was killed by Noyan in front of Tugtekin. Ertugrul bey met the Shehzade Yagit and other beys, stop them from betrayal. After that, Sultan Yagit resigned and helped Ertugrul bey. At that time Turks were attacked by Mongols, Yagit was injured and Tugtekin was killed by them.

Baycu Noyan was captured by Ertugrul Bey. Turgut alp left the tribe as he could not take the revenge of his wife from Mongols. In the Dodurgah tribe, Akca Bey was elected as the new Bey. Sunger Tekin tried to snatch Shehzade Yagit from Ertugrul Alps. Meanwhile, Ertugrul bey reached there and control the situation. In Dirilis Ertugrul Season 2, Noyan tried to take advantage of that opportunity, attacked Ertugrul, and tried to kill him. But Ertugrul bey killed Noyan. Sunger Tekin was wounded in a fight. This event creates a conflict between Ertugrul and his family. Ertugrul Bey presented himself for the candidature of the new Bey. Gundogdu bey spent gold to become new bey. After the bey`s election, Ertugrul bey decided to go to the Byzantine border along with his followers. Saadettin Kopek tried to kill Ertugrul and his companions.