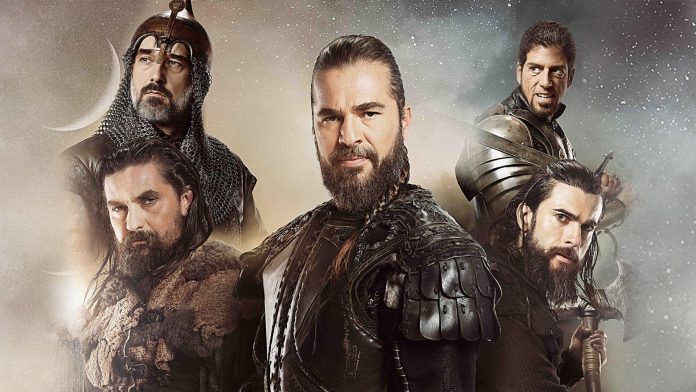 Ertugrul Bey and his tribe have no option of return. Ertugrul Bey was compelled to do trade and earn money for the living of his people. For trade, Ertugrul Bey has to agree upon the conditions of Master Simon. Meanwhile, Candar Bey, The most prominent and powerful Bey of the region learned about Kayi`s arrival in his region. Ertugrul Bey fulfilled the task allotted by Sultan Alladin and saved the life of Sultan`s messenger. The death of Toktamis (Candar bey`s assistant) had deep effects on Candar Bey. Ural`s inequitable trade in the market worried his father. In Dirilis Ertugrul Season 3, SynopsisMeanwhile, the previous opponents of Ertugrul Bey, the Templar knights were disrupted. Kayi people got money by selling the rugs in the market. Master Simon watched this situation silently and planned to make a move. Candar Bey invited Ertugrul Bey to his tribe for dinner and put a trading proposal about rugs before him. The Caravan taking rugs under the supervision of Turgut alp was attacked by the Urals men. Turgut alp was injured. Hacatuyan Usta who devoted his life to Ertugrul Bey wanted to pay this account. Ural Bey thought badly about the Kayi’s and Ertugrul Bey. Meanwhile, Aliyar Bey tried to find out the facts about the Toktamis`s death.

Kayi and Cavdar tribes agreed to work together for the preparation of rugs, the tribes this decision made Master Simon (The ruler of Inn and the market) uneasy.  Candar Bey handed over the duties of Ural Bey to Aliyar Bey. Master Simon tried to misuse Turgut Alp against Ertugrul. At the same time, robbers kidnapped Halime Sultan and Aslihan Hatun. Gunduz was injured during the robber’s attack. Petrus informed Simon about the attack on Caravan and Master Simon tried to use it for his advantage. Amanda was brought to Kayi plain by Master Simon. Amanda told Aliyar Bey about the location of robbers. Ural Bey was angry with Simon on his actions. In Dirilis Ertugrul Season 3, Aslihan hatun fell in love with Ertugrul. Master Simon misused Turgut alp and delivered a poisoned letter to Ertugrul through Turgut. By touching poisoned letter Ertugrul Bey lost his control. This incident made Turgut alp a traitor in the eyes of Kayi’s. Ertugrul Bey died and Dundar Bey decided to take revenge of Ertugrul`s death.

Ertugrul`s death news spread and worried everyone. Ertugrul kept this secret that he was alive. Ertugrul Bey decided to attack the Simon market to take control of it. Aliyar Bey tried to clear the resemblance between Toktamis Bey and Ertugrul Bey poisoning. Everyone knew that Ertugrul was alive. Candar Bey put the proposal of Aslihan Hatun in front of Ertugrul Bey. Saadettin Kopek raised other problems at that time. Ural Bey snatched the gold mine by using Karakoncolos. Ertugrul Bey saved Hactyuran Usta`s life at the last moment. By the efforts of Ertugrul Bey the market now belongs to Muslims. Ertugrul Bey denied marrying Aslihan hatun.

Ertugrul Bey and his Alps were inculpate of doing war. Saadettin Kopek went to Cavdar tribe and fell in love with Aslihan Hatun. Ural Bey learned Saadettin Kopek’s intention and tried to induce him to marry Aslihan. Bamsi Alp fell in the love of a Christian woman. Ertugrul Bey and his Alps saved the life of daughter of Tekfur (Governor). After this situation Tekfur and Kayi’s became friends. Saadettin Kopek put the proposal to marry Aslihan in front of her father Candar Bey. Informal things happened in the Cavdar tribe. Coplan killed his abettor Abuse. Tekfur the governor was killed by Vasilius and Ural was blamed for this. Finally, Candar Bey agreed to the proposal of Saadettin Kopek to marry Aslihan Hatun. Batuhan`s dreams were destroyed by this.

Tekfur`s murderer, Lazkaris reached Cavdar Tribe plain. Ertugrul Bey participated in the wedding event of Aslihan Hatun and Saadettin Kopek, and requested Aliyar Bey to support them. The Qazis found Ural sinful and sentence death to him. Saadettin Kopek and Vasilius tried their best to rescue Ural but all in vain. The wedding was postponed. Candar Bey died after seeing this situation. Vasilius took the help of lie and altered the information to make it appear more acceptable before Ural. The Bey’s election for the Cavdar tribe held in the Toy, Ertugrul Bey supported Aliyar Bey and Saadettin kopek supported another candidate. In Dirilis Ertugrul Season 3, Bamsi’s love for Helena was becoming more and more day by day, but Vasilius also loved Helena. This was the problem for Bamsi.

Ural Bey was released and Aliyar Bey was elected as the new Bey of Cavdar tribe. Aslihan Hatun was attacked and abducted by Batuhan. Saadettin Kopek become furious, when he received the news of Aslihan Hatun kidnapping. Vasilius and Batuhan prepared a trap for Ertugrul but failed. Aliyar Bey was wounded badly. In Dirilis Ertugrul Season 3, Bugay and Batuhan, who knew the location of the cave died. Bamsi alp could not control his nerves and start fighting in the castle. As a result, they put Bamsi in prison. Vasilius with the support of Saadettin Kopek tried to find out Aslihan. But Ertugrul Bey reached there before them. Ertugrul Alps found out the Aslihan Hatun. Helena also loved Bamsi alp so she helped him in escaping from the prison. When Bamsi ran out of prison, they followed him and tried to kill him. Bamsi was injured seriously.

Teo along with his men, chased Bamsi and killed three Turks. Ertugrul Bey, knowing this situation sent Samsa, Turgut and Kutluca alp to finish the Byzantine commanders. They killed the Byzantine commanders in the castle, but escaping from the castle was a big problem.  Dundar Bey fell in love with Gunyeli Hatun and he told his love story to Halime sultan. Halim sultan advised Dundar Bey to forget Gunyeli hatun. In Dirilis Ertugrul Season 3, Helena provided help to the Kayi Alps in the castle in hiding and released secret information to them.  By using that information, Ertugrul Bey restricts the armaments leading to the castle. Vasilius went crazy and doubted everyone around him. Ertugrul Bey apprised Dundar Bey about Gunyeli.

Ertugrul Bey confined Vasilius and caught Teo, using Yagiz. Vasilius doubted Helena and sent her to the oubliette. Dundar`s love for Gunyeli was increasing but she was using Dundar according to her father will. Ertugrul Bey sent Dundar Bey and Dogan alp on a secret mission to Konya, but Dundar Bey released this news to Gunyeli.so in this way that news first reached Ural and then Vasilius. They killed Dogan alp and captured Dundar Bey using that information. After that Ertugrul Bey reached there to save Dundar Bey but found the dead body of Hacatuyan Usta. Ertugrul Bey, Aliyar Bey and their Alps entered the castle undercover. Dundar Bey was injured badly. Meanwhile, Vasilius made a beeline for Nikea to marry Helena. Dumrul learned this from Helena and released this news to Ertugrul Bey. Bamsi alp`s new task was to save Helena from Vasilius. Bamsi completed this work and took Helena to Kayi tribe. Vasilius become crazy he knew about the escape of Helena. Dundar Bey deplored his mistake and left the tribe.

Ural Bey and Vasilius were on their way to attack the Kayi’s, this information was brought to Ertugrul Bey by Dundar Bey. Ertugrul Bey along with Aliyar Bey finished all the traitors in the Cavdar plain. Vasilius with the support of a large army from Nikea attacked Ertugrul Bey. Aliyar Bey was wounded badly and many Alps died in this fight. Halime Sultan gave birth to another baby. Sultan Alladin reached Kayi plain undercover. In Dirilis Ertugrul Season 3, Someone poisoned sultan Alladin. Ibn Arabi gave necessary medicine and treatment to the Sultan. Ertugrul was blamed for poisoning Sultan. Sultan Alladin recovered shortly and disclose his identity. When Vasilius got this news he went off to attack the market and to finish Sultan. But Ertugrul already had a plan to rescue the Sultan. Vasilius was killed by Ertugrul Bey. After that Ertugrul Bey asked the Sultan for Permission to attack the karacahisar castle and permission was granted.

Season Finale: Both Ertugrul Bey and Saadettin Kopek met with Ares in the castle. The topic of tax, trade and Number of soldiers in the castle were discussed by Ertugrul Bey. Emperor received a letter from Ekaterina and replied to her. The Kayi’s and Cavdar tribes were well prepared for war and they went off. Ertugrul Bey was attacked by a group of soldiers. Artuk Bey was wounded. Many Alps died and Ertugrul Bey injured badly.