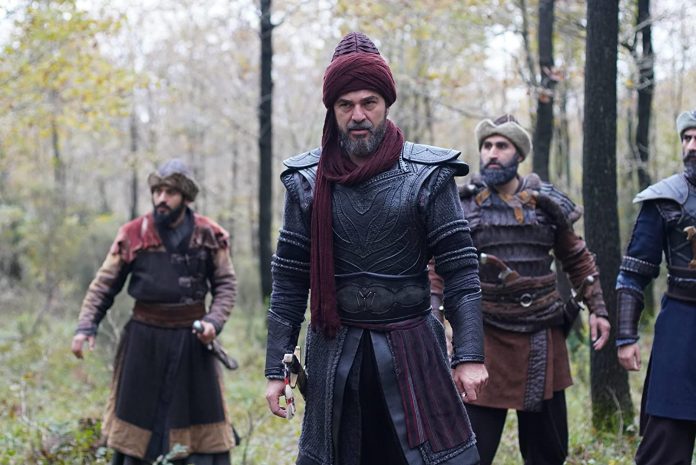 Ertugrul Bey along with his tribe reached Sogut and made it their new plain. During that decade, The Mongols defeated the Seljuk State and took control of Anatolia. The people of Sogut were happy by Ertugrul Bey and this situation troubled the Mongols. The Mongols authorize another tribe to collect taxes from the people. Christian Soldiers as they do not Ertugrul Bey make a secret organization to kill Ertugrul.

Osman tries to rescue Teokles and his daughters and gets wounded. Osman is brought to the plain by Ilbilge Hatun. When Ertugrul Bey knows that Dragos is behind all incidents, he orders soldiers to find Dragos. Hulagu Khan increases the taxes and Ertugrul leaves for Konya to settle this issue. Ertugrul is given an important work by the white beards. The truth about the identity of Ilbilge hatun is disclosed and it is cleared that she was there to collect taxes. Dragos pretend to be a ringer and orders to kill Teokles. The conflict between Kayi’s and Umuroguls increases. Ertugrul Bey will try his level best to get back the chest from Mongols because the chest has secrets about the state. Dragos presents Gunduz as a killer, tries to trap and capture Ertugrul`s sons.

Ilbilge Hatun unintentionally stabbed Ertugrul Bey and this event made the situation more critical. Turgut and Mengen deceive the Mongols and took away the chest without its keys. Dragos secretly kills the Umar Bey using Gunduz`s dagger. Everyone accused Gunduz for killing Umar Bey. This incident increases the tension between the two tribes. Gunduz Bey escapes from there to prove himself innocent. In Dirilis Ertugrul Season 5, Ilbilge Hatun searches for Gunduz. A necklace is given to Tekfur by Evodokya. Irene helps Gunduz get rid of Ilbilge and he gets into the castle. Emir Bahaddin, when he came to know about all these incidents, goes to Inn and tells Gunduz to appear in front of Court. It reveals that Gunduz is in the castle. Lais demands money to give Gunduz. Ilbilge hatun tries to give money prior to Ertugrul but failed.

Ertugrul Bey reveals the news that he has sent his son to Nikea. When Emir Bahaddin hears this news, he reaches Kayi plain and captures the Artuk Bey. Meanwhile, Selcan Hatun along with her son Suleyman reaches the Kayi plain. Ertugrul Bey presents his son in court and it proves that Gunduz is innocent. Selcan Hatun informs Ertugrul Bey about the Mongols activities and delivered Gundogdu Bey`s letter to him. A Turk named Albasti works for Mongols. Ilbilge Hatun is the sister of Albasti, but nobody realizes it. Ertugrul Bey and white beards do a meeting and decide to start a resistance against the Mongols in Anatolia. Dragos wins the trust of everyone around him by disguises as a ringer. Ertugrul Bey captures Lais and kills him.

Everyone was surprised by Ertugrul Bey`s marriage decision. Emir Bahaddin was blamed and killed by Mongols. When Dragos sees Tara`s head, he boasts his efforts to kill Ertugrul. He first sends a poisoned sherbat to Ertugrul, but it is drunk by Beybolat. Ertugrul Bey doubts the ringer. Ertugrul Bey is saved by Ringer in front of church. The abduction of chest and gold make Mongols crazy. Commander Alincak is sent to the Kayi plain by Mongols as new border principal. Commander Alincak reaches to Ertugrul`s tent and takes everyone captive. Then Osman is sent to an unknown place for brainwashing by Alincak. And raising him like Mongol.  Ertugrul Bey writes a letter to Ilbilge Hatun and demands for help. Ertugrul Bey writes another letter to Alincak as if it came from Hulagu Khan. Ertugrul Bey meets Osman but he is poisoned. Beybolat catches Suleyman and grasps all powers.

Ertugrul Bey says Alincak that he will get the outmoded taxes and arrive back to plain. Sirma gets injured while trying to kill Selcan Hatun. Beybolat learns this news and reaches Kayi plain. Hulagu Khan wants to execute Sultan Kaykaus. Commander Alincak tries to find Kaykaus to get appreciation from Khan. But Sultan is kidnapped by Ertugrul Bey. Thanks to Mergen. Berke Khan is held responsible for this incident. Ertugrul Bey arrives back to the plain and it appears that Selcan Hatun was defending herself. Ertugrul Bey realizes that Alincak will kill him when she gets the gold. In this situation, Ertugrul Bey makes a new proposal. According to that offer, Ertugrul Bey will hand over Sultan to Alincak.  In Dirilis Ertugrul Season 5, Beybolat and Commander Alincak reach the place where Ertugrul told to take the Sultan. But Dragos chases them. While Dragos is killing Mongols, Bamsi and Turgut alp abduct Sultan. When these events are happening, Ertugrul Bey reaches Sogut and retains the border principality. Meanwhile, Suleyman brings a pardon decision about his father Gundogdu Bey. Suleyman is captured by Beybolat`s men and they took him to cave. Suleyman is tortured and killed by Beybolat.  Ertugrul Bey comes to know that Albasti killed his nephew Suleyman.

Mergen is captured by Commander Alincak. Alincak tortures Mergen to speak the truth. Ertugrul Bey was offered to cooperate with Uranos, by saying that Uranos would take care of the castle.  In this way, he discovers the location of Alincak and Albasti. And he saves Mergen. Dragos chases Beybolat and reveals him his actual identity. In Dirilis Ertugrul Season 5, Beybolat respects his words and believe Dragos, then they make an alliance. Selcan and Hafsa come in front of each other and fight. Bamsi alp is affected by this. Ertugrul Bey makes a trap to catch Alincak and catches him. Hafsa Hatun tells that she wants to migrate and this thing makes Bamsi Alp more upset. Beybolat injured Alincak to stop revealing his true identity, but Ertugrul Bey took care of him. Ertugrul Bey learns that there is a relationship between the ringer and Uranos. Bamsi alp cannot bear it anymore and leaves the alp duty.