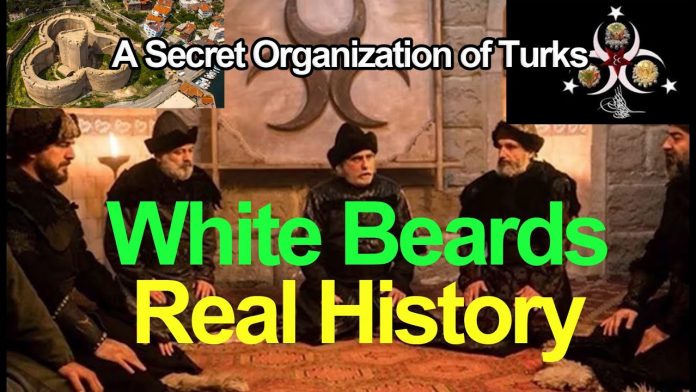 White beards have been seen supporting the leaders in Dirilis Ertugrul, Kurulus Osman, and Ihtyarlar. Some people named them as Heyet in history. According to historical literature, Mete Han is believed to be the creator of this secret corporation. But in TV series like Dirilis Ertugrul and Payitaht Abdulhamid, the initiator of White beards is not described. As you can watch in TV series Dirilis Ertugrul, Ertugrul Ghazi was also a part of White beards secret organization that accustomed to give pieces of advice and intelligence-based information to Ertugrul. This origin of information was also shifted to Osman Ghazi.

Here, the question raises that how Osman Ghazi established an Empire from a tribe without any surveillance and army power? So, there must be a confidential source for all these to assist him. It is believed after strong theories about white beards that they disengaged with the Ottomans after Sultan Mehmed ll vanquished Constantinople because the Ottoman state had become powerful enough to govern the whole world. You may watch the familiar sign as Heyet on screen. This one was sketched by Sultan Mehmed the winner in 1452 CE. Kilitlibahir palace / Canakkale are that ones taken from the Payitaht Abdulhamid series.

According to Dedekorkut, Aksakals Turks are the intelligent people among the public who resolve the issues and they are named as Ashiks (Storyteller). This phrase is used as Bey of a tribe in the early centuries. The well-known historian Rashad Al-din Hamdani narrated Dedekorkut as a real person. He reached to The Holy Prophet (PBUH) and embraced Islam. Nobody can even presume the fate of Oghuz Turks; it was the time when the Holy Prophet (PBUH) forecasted about the win of Constantinople.

“SURELY YOU (MUSLIMS) WILL CONQUER CONSTANTINOPLE, BY THE BEST LEADER AND BY THE BEST ARMY…”

After arriving back, he told the Oghuz sovereign of that time about it. From then, Oghuz Bey began operating a white beards organization. They picked their best Alps and sent them to gather information. The Seljuk Empire of Rum also kept the same lore and Ottoman Sultans certainly began the use of spies in the decision making procedure. There were four different categories of secret agents; the first scrutiny was the front Akinjis, then Deliler for finding facts and the white beards the concealed ones and then the Alps for implementing the orders. When Khorasan, Central Asia, and the Caucasus were vanquished by the attackers, they murdered many white beards because they contemplated them as the masterminds of the resistance. White beards accustomed to show themselves by placing their signs on buildings. The formerly depicted signs show their existence in history and made the theories stronger about them.

Now you are thinking about their existence when Non-Muslims are trying to control Muslims in the entire world. So, we should always keep in mind that the white beards are also a human beings; their surveillance and assistance maybe sometimes do not work. Sultan Abdulhamid tried to set up such a secret organization but he faced too many problems and cannot find the right people for the right duty as it was done centuries before.