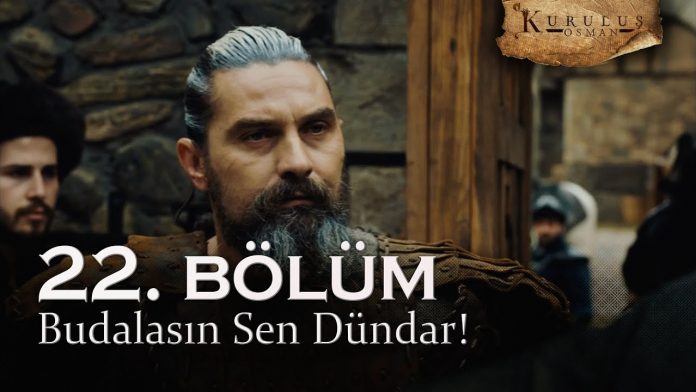 Osman Bey is caught by the Alisar Bey and Bahadir. Bahadir unlashes his father`s hands. Dundar Bey inquires how they found him. Bahadir tells that Aygul told the location of Osman and Osman realizes it. Bahadir attacks Osman, but Osman Bey ceases him. Meanwhile, Konur sends his brother Kongar (Goktug) to the manor of Alisar Bey and reaches plain. Commander Boke ceases Bahadir and tells that he wants Osman Bey alive. Dundar Bey says Commander Boke that this is his personal matter, but Boke does not agree to it. Alisar Bey tries his best to pacify everyone. Dundar Bey says that no one will be calm down until Osman Bey is alive. Alisar is resolute to send Osman Bey to Geyhatu khan. Dundar Bey curses himself as he cannot execute Osman. Commander Boke along with the soldiers of Alisar Bey sets out for Konya, to take Osman there.

Dundar Bey reaches his wife Zohre and rescues her. Alisar Bey reaches his manor talksto Aygul. Aygul inquires the status of her family. Alisar bey informs that everyone is fine and Osman Bey is captured. Aygul thanks to Alisar multiple times. Kongar inquires several troopers of Alisar Bey where Osman Bey is and questions them. Meanwhile, Cerkutay reaches there and assists him. Cerkutay and Kongar realize that Commander Boke took Osman Bey to Konya. Afterwards, Cerkutay says that Balgay is waiting for Kongar. Boke torments Osman Bey and tries his best to make him talk. Osman Bey does not speak what they want and does not tell them the location of Princess Adelfa. While Boke tries to thong Osman, Osman grasp his thong and attacks him. But the troopers of Alisar Bey cease Osman Bey. Kongar and Cerkutay reach in the forest, while Balgay is praying. Kongar tells that Commander Boke and Alisar mutually work and take Osman Bey to Konya. Balgay is not happy with this situation. Balgay says that Osman will not be in the hands of Geyhatu. Balgay is angry with Osman Bey because of Genghis Khan`s laws were unreal and Geyhatu has made a death sentence for him. Balgay tries to get Osman bey from Boke.

Bahadir once again meets with the companions of Dundar Bey and informs what Osman bey did.  Bahadir conveys Dundar`s orders to them and tell them to prepare Alps for rebellion. Meanwhile, Konur reaches the tribe. Gunduz bey and Bamsi doubt that bad things are occurring and set off with immediate effects.  While Aygul and Alisar are talking, Dundar bey reaches manor. Alisar bey tells everything is ready. Balgay and his troopers attack Commander Boke. Dundar`s companions and supporters reach to the plain and try to execute Abdurrahman Ghazi, Abdurrahman Ghazi ceases the traitors one by one. Balgay captures Osman bey and gets angry as he is not loyal to Osman bey. Boke requests to be forgiven and work for Balgay. Kongar talks to Osman bey secretly. Boke`s proposal is accepted by Balgay. The alps in the plain go to the war. Selcan Hatun sets off to Sheikh Edebali and explains everything to him. Sheikh Edebali inquires why Bala returned. Bala tells why she returned and the latest incidents to Sheikh Edebali. Then she apologizes to her father.

Bahadir and his alps charge Gunduz Bey. Gunduz Bey and Bamsi realize that Bahadir is a traitor.  While the alps are fighting, Bahadir understands that he will lose the fight and he tries to escape from there. Bamsi follows Bahadir and stops him. Bamsi tries to urge Bahadir, but Bahadir attacks him. Bamsi tries to neutralize Bahadir, but Bahadir does not change his point of view. Balgay continues to brutally tormenting Osman Bey and Boran. Balgay questions about Genghis khan`s laws but does not get any answer. Osman Bey tells that Balgay bought Kongar from a serf market and made him a Mongolian. Balgay inquires Osman Bey how he knows all this. Osman Bey tells that he made a union with Byzantine emperor. While Bahadir and Bamsi fight again, Burcin will shoot Bamsi with arrows. Bamsi is injured badly by Burcin, who was a daughter for him. Gunduz and Alps reach and rescue Bamsi from the traitors.

Konur is sent by Gunduz Bey to kill traitors. But Konur is stopped by Bamsi. Bamsi is very disturb because of his injury and tries to chase Burcin. Meanwhile, Osman Bey tells about the pact he made with the Byzantine emperor and tells that he has got information from him. Balgay does not accept Osman Bey`s saying and tells him to prove it. Balgay gets the document that Osman have. This paper is about a serf that Balgay bought years ago. Balgay trusts on Osman Bey. Osman Bey tells that Geyhatu will come and must be free to guard his plain. Balgay tells that he will not make a deal. Osman Bey tries to convince Balgay to release him on the rate information about Geyhatu. With the help of that information Balgay can get Geyhatu of his throne. Balgay accepts this proposal. Osman Bey tells Boran to take the laws of Genghis khan. Balgay sends Kongar with Boran.  Aygul and Zohre observe marriage preparations. Augul is upset about the future, but Zohre is hopeful and calm because of the wedding. Sheikh Edebali and Ahis are carrying on the construction of the dervish cottage. Sheikh Edebali uprights himself and calls the Ahis. Sheikh Edebali describes the incidents that occurred to the Muslims after the migration (Hegira).

Aygul and Alisar get married in the manor. Bahadir reaches right after the wedding and tells that everything is devastated. Dundar Bey desires to go and attack as soon as possible but suddenly fell ill. Dundar blackout. Everyone in the manor is scared. Balgay sends his troopers to search around and is alone with Osman Bey. Balgay questions about the monks. Osman Bey tells what he did to avert Geyhatu`s alliance with Byzantine and to stop Sophia from taking the throne. Osman Bey tells that he beat Geyhatu and Boran will bring the laws of Genghis Khan. Osman Bey secretly unlashes his hands and attacks the Mongolian troopers. Balgay sends his troopers to capture Osman Bey. The doctor who comes to the manor to check Dundar bey says that he should rest for some time. Bahadir says that they should not wait anymore.  Selcan Hatun reaches to the Sheikh Edebali and informs him about what occurred on the plain. Selcan describes what Osman bey did. Sheikh Edebali listens to her carefully and calms her.

Osman Bey continues to run from the Mongols in the jungle. Boke and his troopers stop Osman Bey. Osman bey beats the Mongolian troopers and a fight starts with Boke. When Osman Bey is about to defeat Boke, Balgay reaches and injures Osman. Osman Bey manages to run from there even he is wounded. Gunduz, Bamsi and the Alps return to the plain. Gunduz Bey sets off with the alps to Alisar`s manor. Dundar Bey stands up while he should take rest and says he wants to go out to help his companions and supporters. Kongar and Boran realize that Osman Bey has run and start searching for him.  Gunduz, Bamsi and the alp`s reach the manor. The troopers of the Alisar do not open the gate and a fight starts on it. Osman Bay cannot bear the pain and falls down from his horse. While Osman is lying on the ground, some people secretly try to attack Osman Bey.  Click here to watch full Episode 22