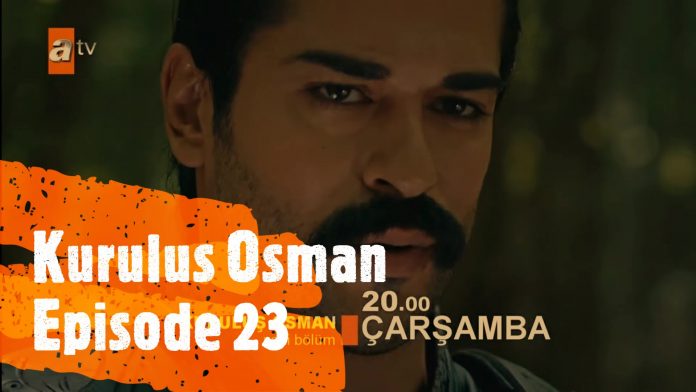 Osman is found by Ahis, who was wounded while running away from the Mongols. Osman Bey and Ahis reach to the Sheikh Edebali together. Bamsi Bey tries his best to open the gate of Alisar`s manor. Dundar Bey desires to fight with Gunduz Bey.  Then Alisar orders his troopers to attack. The fight is about to start in the manor of Alisar Bey. Gunduz Bey starts to talk and tells that he understands Dundar Bey`s traitorous plan. Alisar Bey`s mind changes and he stops his troopers. Alisar Bey tells that he does not know anything and listens to Gunduz. Bamsi tells that the killer of Dundar`s son is Alisar. In Kurulus Osman, Sheikh Edebali and Bala find that Osman Bey is wounded. Sheikh Edebali and Ahis try to assist Osman Bey. Alisar says that what Gunduz Bey told about him is recline and tries to attack him. Meanwhile, Aygul reaches and stops everyone. Alisar continues to say that he is not guilty. Gunduz Bey Gunduz Bey tells Alisar not to impede with the Kayi plain, but Alisar does not agree with it. Bamsi apprises Alisar once again, but Alisar says he is trying to keep the order. Alisar Bey presents a proposal to talk and arrange a meeting the next day in Sogut.

Sheikh Edebali callus the wounds of Osman Bey and then send a message to the Kayi plain. Zohre gets annoyed and apprises Aygul for what she has done. Aygul denies her mother. Meanwhile, Alisar reaches and slaps Aygul. Alisar is very irate about what happened. Balgay begins collusion with other Mongol commanders and plans a riot against Geyhatu Khan. Balgay says that geyhatu will come to Sogut and invites troopers from all over Anatolia to execute him. Bala and Selcan Hatun despairingly wait for Osman Bey. Bala tries to speak to Osman Bey and tells him to wake up. Gunduz Bey and Bamsi reach to the plain. One of the Ahis meets them and informs the condition of Osman Bey. In Kurulus Osman, Bamsi desires to meet Osman Bey, But Gunduz Bey stops him. Gunduz Bey orders Abdurrahman Ghazi to remain on the plain and plans to set out for Sogut with Bamsi. Dundar and Bahadir are worried because of what Alisar told. Alisar speaks why he did so. Alisar`s new scheme is to murder Gunduz and Bamsi, and he selects his best troopers for this task. Ahis and Sheikh Edebali do dhikr and pray to Allah Almighty.

Meanwhile, Osman bey wakes up and starts to pray to Allah.  That night Osman bey saw a dream. In Osman Bey`s dream, the moon comes out of Sheikh Edebali`s chest and gets into Osman bey`s chest. Then a tree comes out from Osman bey`s chest. This tree flourishes rapidly and the branches of the tree cover a lot of places. Osman Bey glimpses swords and minarets in these places. Osman Bey wakes up and thinks about his dream. Meanwhile, Sheikh Edebali realizes that he is waking and goes to him. Osman Bey describes his dream to Sheikh Edebali. Sheikh Edebali hears to Osman Bey and tells that the time has come. Sheikh Edebali grants Bala to marry Osman Bey. In Kurulus Osman, Sheikh Edebali says that Allah acknowledged Osman Bey and his generation being Hakan and that many places will meet Islam thanks to Osman`s struggles. Osman Bey cries of joy. Balgay and his troopers attack the troopers of Geyhatu Khan. Balgay gets that Geyhatu is already on his way to Sogut and Alisar got a command to kill Osman. Bala reaches to Osman bey and realizes that his father grants her to marry.  Then Selcan hatun reaches there and learns the news of Osman bey and Bala`s marriage.

Dundar inquires about Alisar`s scheme and tells he is worried about Osman Bey. Alisar tells that Osman bey is now dead. Osman bey gets information about the latest incidents from Boran. Osman Bey Doubts that Alisar is about to do something. Kongar is sent to Balgay by Osman Bey. Bamsi alp and Gunduz Bey discuss about the meeting and set out together. Kongar finds Balgay`s confidential place and goes to him. Balgay demands for the Genghis Khan`s laws but Kongar tells that Osman bey lied to them. Alisar`s troopers set a trap and start waiting for Bamsi and Gunduz, but Osman`s alps execute them. Alisar and Dundar Bey go to Sogut and consider that Gunduz is already dead. In Kurulus Osman, Bamsi and Gunduz Bey reach to Sogut. Alisar sees that they are not deceased and is astonished. Balgay talks to Kongar. Kongar would like to thank Balgay for his efforts. Balgay is bothered about what Osman Bey will do, but Kongar says that he will murder Osman. Alisar and Gunduz start discussing. Gunduz wants to take back the betrayers and says that Alisar should not impede with the internal affairs of the plain. Alisar says that he will not give back the betrayers to them and the plain relies on him. Gunduz Bey objects to Alisar`s this talk.

Alisar starts to get annoyed and tension increases. Gunduz Bey ceases the Alps and says that those in the tribe are uneasy because of Alisar`s actions. Alisar announces that these lands belong to Geyhatu Khan and menaces Kayis. Gunduz Bey says that they have faith on Allah Almighty and leaves the conference. Osman Bey gets information about the confidential place of Balgay and sets out. Alisar tells that Geyhatu Khan will make the final decision regarding Kayis. Osman Bey and the Alps secretly find the Balgay`s camp and find Kongar. Kongar says that when Geyhatu khan arrives to Sogut, Balgay will attack.  Balgay tells that he will begin a fight between Geyhatu khan and Kayis and then attack Geyhatu Khan. Meanwhile, Osman Bey and his Alps enter Balgay`s base. Osman Bey says he desires to make a deal with Balgay. Alisar and Dundar Bey find dead troopers in the forest. One of the Dundar`s Alps recalls Alisar`s dead trooper and tells that he had acted like a Mongol trooper before. Dundar Bey says his Alp to remain quite. Alisar says that Osman Bey murdered his troopers, but Dundar objected. Dundar Bey tells that Commander Boke took Osman Bey to konya. Alisar and Dundar Bey disagree.

Osman Bey tries to make an accord with Balgay to get rid of Alisar. Balgay hands over the instruction sent by Geyhatu Khan to Osman Bey and tells that other commanders are coming to eliminate Geyhatu Khan. Dundar Bey realizes that Alisar is lying and tells this to Bahadir. Meanwhile, Boke reaches to Alisar`s manor with wounds and tells that Balgay has abducted Osman bey. Dundar Bey tells that Balgay and Osman bey are collaborating. Boke tells that he knows the Balgay and Osman Bey`s location and Alisar should strike on them. Bamsi Alp and Gunduz Bey prepare the tribe for a possible strike and start waiting for it. Gunduz bey reveals that Sheikh Edebali grants permission for the marriage of Bala Hatun and Osman Bey. In Kurulus Osman, This news makes everyone happy on the plain. Selcan Hatun talks to Bala Hatun and advises her regarding marriage. Konur meets Boke secretly and gets information about what Alisar will do. Osman Bey and Bala Hatun get married in the existence of Sheikh Edebali. They pray to Allah together after marriage. Osman Bey and Bala hatun are very cheerful. Aygul gives his brother`s dagger to Alisar and tells him to murder Osman. Osman Bey would like to thank Sheikh Edebali for his assistance and request for more assistance from him. Osman Bey says that he will bring tranquility and justice to these lands. Then Osman Bey, Gunduz bey, and other Kayi Alps set forth.