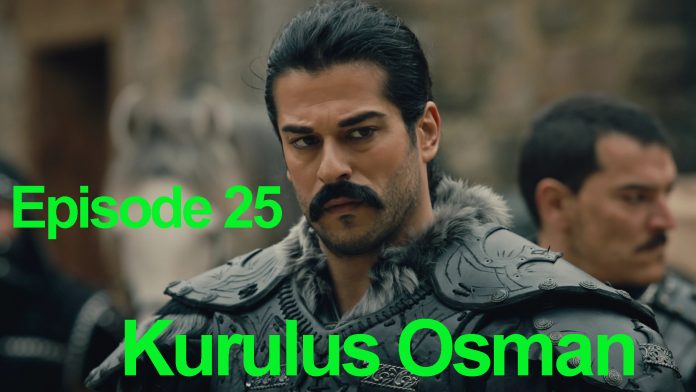 Byzantine troopers try to capture Princess Sofia. Sofia murders troopers sent by the emperor in the forest. Osman Bey and Bala Hatun chat with each other. Aygul thinks of her brother Batur and believes he is alive. Zohre goes to Aygul and learns that she is acting oddly. Aygul tries to falsify by using the sod. Zohre says that Batur will not return, but Aygul does not agree with her mother.  Zohre once again says that Batur is deceased. Aygul does not believe in reality. Zohre starts crying and tries to quiet Aygul. Aygul gets annoyed and tries to choke her mother. Zohre smacks Aygul and rescues herself. Osman Bey and Bala Hatun sit beneath a tree. Osman Bey holds the hand of Bala Hatun and chats about the future. Bala tells she will assist Osman Bey as much as she can, but she does not aware if she can give birth to his child. Osman Bey tells that Allah is aware of everything and will bestow them with children in the future. Osman Bey and Bala Hatun hold up. Osman Bey tells that Turkish people will join in the future and set up a blessed state.

Dundar Bey takes a seat in front of the tent and observes Aygul. Aygul exhibits her flowers to her mother and says to them that she gathered them along with Batur. The deeds and cues of Aygul make her father cry. Zohre inquires how they can cure Aygul. Dundar Bey tells that Gunduz Bey is searching for a good doctor. Zohre says that her partner should eat something, but Dundar tells them he is very distress about what happened. Meanwhile, Hazal Hatun reaches to the plain. Cerkutay goes to speak to Subutay. Subutay tells he intends to speak to Balgay and inquires him about his location. In Kurulus Osman Episode 24, Cerkutay says that he will not betray Balgay.  Subutay places his sword on the neck of Cerkutay and menaces him. While Zohre presents food to Dundar, she watches Hazal is coming to the plain and the food drops from her hands. Hazal reaches to Dundar and speaks to him. Hazal later tells that she is distress about what happened. Gunduz and Bamsi watch Hazal came. Gunduz Bey welcomes Hazal. Bahadir reaches to his mother Hazal. Hazal intends to give the gold sent by her brother to Gunduz, But Gunduz denies it. Selcan Hatun welcomes Hazal and speaks to her. Hazal tells that she will stay there for some time. Princess Sofia goes back to the fortress and Salvador meets her. Sofia tells that the troopers of the emperor are chasing her and it will be dangerous to leave the fort.

Salvador tells that he will take all the provisions, but Princess Sofia says that this will be inadequate. Sofia tells that the only force to save her from the emperor is the Kayi tribe. Sofia sends Salvador towards the Kayi tribe and tells she intends to make an alliance with them.  Sofia is prepared to do everything for the formation of this alliance and will agree to all the conditions of Osman Bey. Hazal Hatun inquires about the location of Osman Bey. Gunduz Bey tells that Osman Bey is doing wedding preparations. Meanwhile, Osman Bey and Bala Hatun return to the plain. Bala pecks the hand of Hazal Hatun. Hazal says to Bahadir that she has returned to the plain because of what occurred. Hazal tells that Bahadir should not be held responsible for the misdeeds of Alisar. After Salvador leaves the fortress, Sofia informs Helen why she did so. In Kurulus Osman Episode 24, Sofia tells that she intends to save time until Geyhatu Khan reaches to Sogut. Hazal tells that Bahadir made an error but did not betray. Osman Bey tells that Ertugrul Bey will decide about the Bahadir. Hazal hears to Osman Bey but tells that the uncles of Bahadir will not agree to the decisions that mean his life. Osman Bey says that he does not intend to harm Hazal, but nobody should be intricate. Osman Bey bids everyone to his wedding and leaves. Cerkutay takes Subutay to the secret place of Balgay. Subutay confiscates food from the plate of Balgay and begins to eat.

Subutay and Balgay start a discussion about Geyhatu Khan. Subutay tells that the troopers died who suppose to assist Balgay. Balgay gets annoyed and takes out his sword. Subutay tells that Balgay is still precious for Geyhatu Khan and that he must concede Osman Bey. A monk named Alexis comes to speak to Sofia and says that he is distress about what occurred to Yannis. Princess Sofia tells that the daughter of Dundar was ill, and they were searching for a doctor. Alexis tells that he is not a doctor, but Sofia says she requires a magician and gives him a concoction. Selcan and Osman Bey discuss the Hazal. Osman Bey believes that Hazal returned because of something else. Zohre goes to Hazal and speaks to her. Hazal allocates someone to chase Zohre. Kongar and Balgay exercise the sword brawl and discuss the Osman Bey. Balgay sends Cerkutay to Osman Bey and asks him to inform him that they are ready to brawl Geyhatu Khan. According to the scheme of Balgay, while Osman Bey is doing preparations for the wedding, Cerkutay will murder him. Konur and Boran make a wager on who will secure the race in the evening. Abdurrahman Ghazi and Bamsi Bey discuss the wedding of Osman Bey. Meanwhile, Salvador reaches to the plain.

Aygul reaches while Selcan Hatun and Bala are baking for the wedding. The condition of the Aygul is getting worse and she begins to think she has a baby. Salvador informs Osman Bey and Gunduz Bey that Princess Sofia intends to make an alliance. Osman Bey believes that Sofia has other schemes. Bamsi defies to this alliance. Osman Bey perceives that Sofia has made this scheme to save time and tells that he has terms for the alliance. Osman Bey tells Sofia to declare that he is the owner of the fortress, come to the Kayi tribe and concede, and embrace Islam and marry Konur. Salvador set forth to the fortress. The doctor sent by Sofia reaches to the plain and speaks to Dundar Bey. Kongar chases Cerkutay to prevent him from murdering Osman Bey and brawls with him. The imitation doctor inspects Aygul and gives Zohre medicine. The doctor says he intends to chat to Zohre about some other topic. Mongolian troopers try to cease Kongar. Balgay reaches and hits Kongar with a toxin arrow. Balgay by force swallows a drug into Kongar. The doctor tells that Sofia sent him and gives him a toxin to feed the goats. Those who devour these poisoned goats will die.

Osman Bey and his companions compete for carrying goats. Osman Bey procures the race. Hazal Hatun and Dundar Bey chat alone in a secret place. Dundar tells he is dejected. Hazal tries to enhance the confidence of Dundar. The fake doctor goes back to the fortress and tells that he has fulfilled his duty. Princess Sofia tells that she will take retribution from Yannis that night and turn the Kayi plain into a graveyard. Selcan Hatun selects the goats to be cooked for the feast. Then Zohre covertly approaches these goats and gives them toxic food.  According to the Turkish lore, the wedding of Osman Bey starts that evening. Osman Bey gambols for Bala Hatun. Bamsi Bey reads rhyme before the feast starts. Dundar Bey does not attend the wedding of Osman Bey and ponders about his mistakes. Osman Bey orders to chant songs.

Gunduz Bey chats with Sheikh Edebali and requests him to pray. Sheikh Edebali prays to Almighty Allah. Sheikh Edebali prays to be honest, empathetic, and victorious in the Alps. Aygul proceeds to her father and requests her father to go to Osman’s wedding. Dundar Bey welcomes the request of his daughter and attends the wedding together. Osman Bey stands up and greets his uncle. Hazal Hatun perceives that Zohre is restive, but Zohre refuses this.
Everyone at the wedding eats the cooked goat meat. Zohre spouts a drink on Aygul and quit the table. Zohre says Dundar Bey to come with them.   When Osman Bey is about to begin the meal, Hazal Hatun ceases everyone and says that no one should eat goat meat. Osman Bey inquires what occurred. Hazal tells that the betrayer Zohre poisoned the food. Zohre asserts that Hazal is lying. Then Hazal tells Zohre to eat goat meat. Zohre denies and assaults Hazal instantly. Hazal ceases Zohre and cuts her throat. Zohre dies. Gunduz Bey gets annoyed with Hazal, but Hazal tells she is aware of everything. Osman Bey inquires why Hazal has not disclosed the reality before. Hazal speaks that everyone incurs their lives to her. Watch Kurulus Osman Episode 25. it will be uploaded here