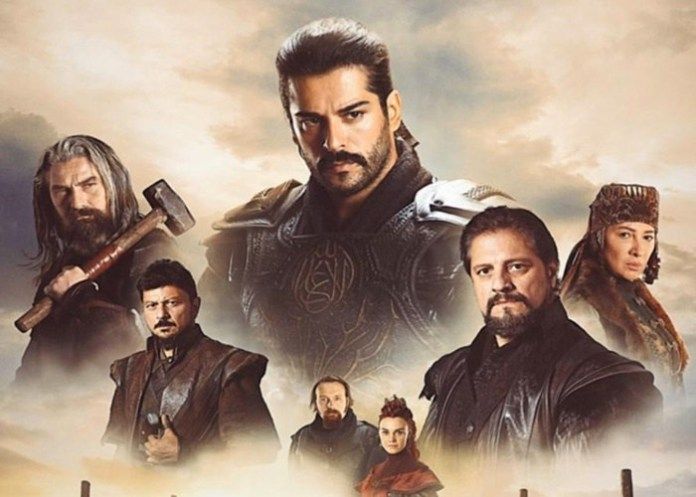 The main theme of the series (Kurulus Osman) is the life History of Osman Bey, the son of Ertugrul Ghazi. This series includes and highlights all the strains, troubles he faced and how the Ottoman Empire was set up. Well known names such as Burak Ozcivit (Osman Bey), Ozge Torer (Bala Hatun), Ragip Savas (Dundar Bey) play their roles in the series. Starting after the completion of Dirilis Ertugrul, the series carry on with almost alike cast.

No matter how fictitious the series is based on, it successfully describes the life and provocations in Anatolia, motivated by Turkish and Islamic history. In the first episodes the connections between the Kayi tribe and Byzantine are exhibited. Osman Bey`s uncle Dundar Bey controlled the plain in the truancy of Ertugrul Ghazi. In Kurulus Osman Season 1, Dundar Bey intends to make a deal with Byzantium and earn more wealth for his tribe, but the things do not happen as he wanted. Byzantine governor Yorgopolos is murdered by a plan made by his wife and commander Kalanoz. Sofia, the governor`s wife, blames Osman Bey for this happening. Osman By runs away proving his guiltlessness. Meanwhile, Bamsi`s son Aybars is martyrized. This incident deeply affects Bamsi.

When Osman Bey is looking for the killers of Aybars, Sheikh Edebali and Ahis come. Efendi (Master) Yannis begins to make traitorous schemes while their entry makes the Turks happy. Soon, Osman Bey get a glimpse of Bala Hatun, Edebali’s daughter and fell in love with her.  Bala Hatun takes Osman Bey to her father Sheikh Edebali and makes him known. Osman Bey recollects Sheikh Edebali from the stories told by his father and respects him. Meanwhile, Dundar bey intimidates Byzantines due to Aybars’ death and the agreement to be canceled. Osman Bey is seized because of Sofia`s allegations and waits for hearing. But for Osman Bey this delay will not be easy because Bala Hatun has been abducted.

Yannis and troopers attack the market place and murder everyone. Alisar Bey desires to judge Osman in Sogut, but Kalanoz has an objection to it. Yannis gives poisons to Bala Hatun and intends to take the valuables in the hands of Sheikh Edebali. Osman Bey captures Teokles, but Batur abducts him. Osman Bey gets very annoyed and punishes Batur.  Osman Bey has to take over the antitoxin to rescue Bala Hatun. The traction between Dundar Bey and Osman Bey is increasing day by day.

Osman Bey takes the antitoxin from Yannis`s hand and throws away all the allegations. Sheikh Edebali is not happy with Osman`s deportment and thinks he is not grown enough. Selcan Hatun returns to the plain, but Zohre, the wife of Dundar, is very upset by this situation. Yannis appears to be culpable, but someone else is killed instead of Yannis. Sofia considers that she has deceived Dundar Bey. Abdurrahman Ghazi returns to the plain and tells that Ertugrul Ghazi is ill. This news worried everyone in the plain. Yannis`s trooper Salvador plans a trap and captures Osman Bey. Sheikh Edebali tries to rescue Osman Bey. 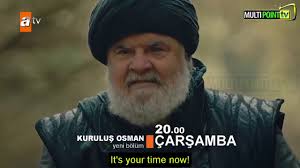 Thanks to Sheikh Edebali, Osman Bey and his Alps are liberated from the oubliette of Yannis. Osman Bey sends Selcan Hatun to Sheikh Edebali to marry Bala Hatun, but Sheikh Edebali does not permit this marriage. Osman Bey cannot comprehend Sheikh Edebali`s decision and is worried. Yannis carry on making traitorous plans. The presence and movements of Sheikh Edebali muddle Yannis very much. Then Yannis tells Kalnoz to frame up a trap to murder Sheikh Edebali. Osman Bey saves Sheikh Edebali when he is about to die. In Kurulus Osman Season 1, While Alisar and Sofia are secretly planning to make a union, the news of the Kalanoz`s murder reaches. Sofia once again held Osman Bey responsible for this. Alisar goes to Kayi plain and gets annoyed with Dundar Bey and tells him to find out the responsibility for this incident. Osman Bey gets enraged at Alisar and leaves the tent.

Alisar attacks Gunduz Bey to take retribution on the Kayis and hurts him. Osman Bey starts searching for those who attack his brother. Alisar intends to marry Bala Hatun to control Sheikh Edebali, but Sheikh Edebali does not permit him. In Kurulus Osman Season 1, Yannis camouflages and tries to control Alisar Bey by providing news about the future. Dundar Bey tries to stop the Mongols from coming to the tribe by returning back the gold of Alisar, but the Mongols are already approaching to Sogut.

Mongolian troopers under the command of Commander Balgay start killing everyone and robbing their homes. Osman Bey is the only person who combats the oppression of Balgay. The main task of Commander Balgay is to get Byzantine forts in the border area. Balgay presents a proposal to Osman Bey and asks him to work for him, but Osman Bey denied accepting his offer. The most important thing for Osman Bey is liberty. Balgay considers that Alisar is no more useful and tries to make an alliance with Princess Sofia. Sofia inclines towards this offer by Balgay to demolish Turks.

Commander Balgay reaches to Kayi plain and intimidates everyone. Gunduz  Bey and Batur are on the verge of death.  Dundar Bey agrees with what Balgay said and follows his orders to avoid further confusion. Meanwhile, white-bearded men appear and say they will assist Osman Bey. Osman Bey listens to those men carefully and starts to frame up a trap against Balgay. Osman Bey`s actions muddle Dundar Bey. Dundar Bey orders Osman Bey to be expelled from the plain. Osman Bey accepts the Dundar`s order and goes to the Samsa`s tent. Although Osman Bey and Samsa have the same objective, Osman`s failure to share information about White-bearded men with anyone muddles Samsa. A dispute arises between Samsa and Osman Bey. In Kurulus Osman Season 1, Commander Balgay became powerful as he got the dagger belonging to Genghis Khan.  Meanwhile, Alisar secretly murdered Batur and blamed Osman Bey for this incident.  This event makes Dundar Bey and his wife Zohre belligerent to Osman Bey.

Osman Bey returns to the plain to take back the belongings of Genghis Khan, but Batur be disloyal to him once again. Osman Bey is aimed by an arrow in the middle of plain because of Batur. For Osman Bey, his uncle Dundar and his son Batur are nothing. Meanwhile, Samsa Bey begins preparations to attack the Mongols alone.

Commander Balgay is out of mind now and takes Gunduz Bey as a prisoner with him to catch Osman Bey. Begay’s troopers tormented Gunduz Bey in various ways, but Gunduz Bey speaks nothing. In Kurulus Osman Season 1, Dundar Bey is completely under the command of Balgay and he thinks he has rescued his plain. Osman Bey and Samsa rejoin and attack Balgay`s confidential place. Osman Bey successfully saves his brother. Osman Bey captures Princess Sofia and Kongar as the next move.

Dundar Bey reaches when Osman Bey is attacking the Commander Balgay. Dundar Bey held Osman bey responsible for the death of his son. While Osman Bey and Dundar Bey are brawling, a trooper of Alisar hits Dundar bey with an arrow. Dundar Bey is seriously wounded and Alisar intends to use this situation. Osman Bey sends his uncle Dundar Bey to a safe place and gives treatment to him to save his life. In Kurulus Osman Season 1, During Dundar Bey`s truancy, an election is held in the Kayi plain and Gunduz bey is elected as the new leader of the Kayi tribe. The killer of Bamsi`s son, Salvador, embraces Islam and starts working for Osman Bey. Alisar Bey goes to the Byzantine fort and tries to convince Princess Sofia. Alisar`s only purpose is to get rid of  Osman Bey and the Kayis.

Troopers of Alisar attack Abdurrahman Ghazi and abduct Dundar. Meanwhile, Zohre and Aygul decide to leave them plain. Alisar invites them to his castle. Mongolian Emperor Geyhatu Khan intends to join with Byzantine and will, therefore, marry Princess Adelfa. White-bearded men give Osman bey a task to break this association. While, Princess Adelfa is on her way to Konya, Osman Bey abducts Adelfa and takes her to the Kayi tribe. Balgay is annoyed because he could not take Genghis Khan`s laws to Geyhatu Khan and wants retribution on Osman Bey. Dundar Bey meets with his family and starts to plan for retribution from Osman Bey.  Osman Bey meets with Balgay. Balgay tells that Alisar worked for Geyhatu khan and murdered Batur.  Osman Bey forms an association with Balgay to finish Alisar. Balgay agrees to this offer because he intends to take the Genghis Khan`s laws.

Selcan Hatun tries to conceal Princess Adelfa in the plain, but Burcin slinks upon her. Osman Bey and Balgay go to Alisar`s castle together and inquire where Dundar Bey is. Alisar lies to them about Dundar. Osman Bey continues to execute his scheme and tells that the laws of Genghis Khan are in Yannis. Balgay gets annoyed and sends his troopers to the castle. Dundar Bey and his family decide to go back to the plain and set forth. Kongar takes Genghis Khan`s laws and set forth to give them to Balgay. Dundar Bey reaches the plain and accepts Gunduz Bey as the new leader of the Kayi tribe. The main objective of Dundar Bey is to find out the Princess Adelfa. Alisar sends a message to the Geyhatu khan telling that the princess is in the Kayi tribe, Osman Bey`s Alp captures the messenger.

Bamsi Alp and Gunduz Bey think Dundar is accountable for abducting princess Adelfa.  Meanwhile, Ertugrul Ghazii`s brother, Sungur Tekin, who has been undercover for years, appears as a monk and learns the person who will take over the Byzantine royal seat. Osman Bey saves his uncle Sungur Tekin from the Mongol commander Boke. Sungur Tekin reaches to the Byzantine fort. In Kurulus Osman Season 1, Dundar Bey calls his son Bahadir back, whom he had previously expelled, to the plain. According to Dundar Bey`s plan, Bahadir returns to the plain and creates new problems. To become more powerful, Alisar conceals princess Adelfa in his castle and waits for an appropriate time to deliver her to Geyhatu Khan. Alisar intends to marry Aygul to control Dundar Bey. Aygul agrees to marry Alisar because she wants retribution from Osman Bey. Osman Bey returns to the plain and proclaims with his uncle.

Begay’s trooper Kongar remembers the reality about himself and takes steps to take retribution on Balgay. Osman Bey intends to utilize Aygul to show the reality about Alisar to Dundar. Alisar takes quick steps to save Dundar from the hands of Osman Bey. Aygul says she will assist Osman Bey.  Then Osman Bey sends Aygul to Alisar`s castle. Aygul talks to Alisar and requests him to rescue her family. Kongar abducts Princess Adelfa from Alisar`s castle to help Osman Bey.  Aygul betrays Osman Bey and Alisar taking advantage of it attacks Osman Bey. Alisar takes Dundar Bey from Osman`s hand and says that he will send Osman Bey to Geyhatu Khan.