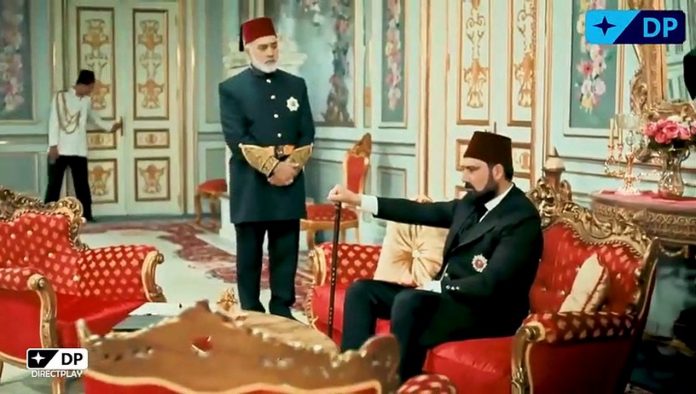 In the first scene of Payitaht Abdulhamid episode 128, Ahmed promised to free the students after interrogating them and he took them to the palace. Abdulhamid became angry with Ahmed for shooting the students and commanded that students would be staying in the palace overnight. Meanwhile Ahmed received a secret message from Manyas and immediately left the palace. Abdulhamid inquired about Pashas from the soldiers. Esref Aziz stopped Zakaryan’s soldiers and extracted the information regarding masons in Thessaloniki from them. Abdulhamid inquired about the names of some reliable families in that region for establishing the wireless telegraph line in Tripoli.

Manyas asked Ahmed to kidnap the students in the palace, but Ahmed expressed that he would be unable to do that. Asaf reached to the Colombia Hotel located in Thessaloniki, but Sabahaddin realized that he was spy of Abdulhamid. Zakaryan attacked on the Uncle’s shop. As a result of that attack, Osman and Uncle got injured. Aliye disclosed the news outside the palace that Abdulkadhir had left and that Bidar is facing some mental health issues. The newspapers published the news of Abdulkhadir leaving the palace, Bidar was mentally ill and students got killed. Selim handed over the military uniforms to the students and asked them to come out of the palace. Tahsin handed over the button that he had found in the Selim’s house to Hunkar. Finally Abdulhamid realized that students were getting on the Britain ship.

Bidar got a note in which he was informed about the kidnap of Abdulkhadir and was asked to take action and follow the instructions of kidnappers. Abdulhamid came to know that the British ship was sailing towards Odessa and contacted the German ambassador in order to inform Japanese ambassador. Abdulhamid expressed that British have decided to harm the Japanese by collaborating with the Russians. On the other side Bidar had stolen the list of families names from Abdulhamid’s room and sent it to an address. The German delegate arrived at the palace and said that they are allowed by British government to search the ship.

Abdulhamid called Hechler to the palace. As Asaf was following Sabahaddin secretly, Talat had sworn to become a mason. Tatavlali kidnapped Uncle in order to get Zakaryan back. Tahsin, Hechler and German ambassador headed towards the English ship and took all the students out. Abdulhamid return all the students to their families. In the last scene of Payitaht Abdulhamid episode 128, a soldier informed Abdulhamid that the families in the Tripoli got under attack. Abdulhamid realized that only 3 people know about the whereabouts of families of Tripoli. Abdulhamid immediately commanded for the exile of Tahsin, Mahmud, and Hakki.