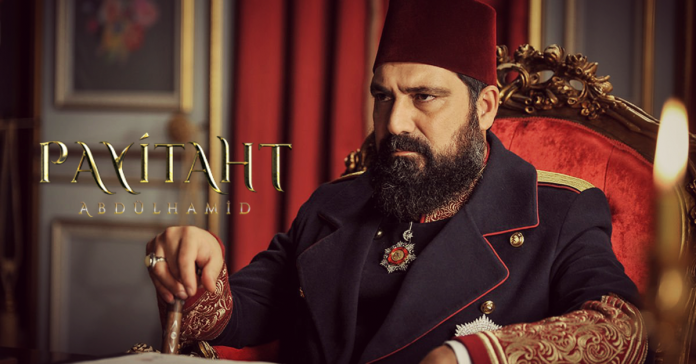 In the first scene of Payitaht Abdulhamid episode 130, Abdulhamid commanded the soldiers to follow the telephone line and went to Mahmud’s house. He immediately saw the secret phone of Mahmud and arrested him. On the other side Hechler and Isaac chalked out a plan to get information about other stations. As Grand Vizier listened to the ideas of Isaac, he ordered for establishment of committee which will determine the cost and called Talat to Payitaht.

Meanwhile, Abdulhamid ordered Ahmed to arrest Manyas. Hunkar commanded Selim to follow Ahmed and shoot him if he didn’t get arrested. Saliha arrived at the palace after long time, but Naime was not comfortable with the situation. Karasu got to know that Talat was heading towards Payitaht and suggested that Frida should accompany him. In the next scene, Abdulhamid walked to the dungeon and interrogated Mahmud. Mahmud revealed that the secret phone is only used by him to order the food. Hechler informed the Russian ambassador regarding the station in Crimea and he became concerned.

Russian diplomat questioned Abdulhamid, but Hunkar told him that there would be no hostility. After the funeral of Asaf, Karekin planned a meeting at a restaurants and Esref made a plan to attack them in the restraunt. Abdulhamid again interrogated Manyas, but Manyas said that he will reveal all the information to him when the time will come. On the other hand Russian diplomat headed to the port and checked all the bags of passengers that were going to Crimea. Documents regarding the radio were found inside the Talat’s suitcase. The Russian diplomat informed Abdulhamid of this situation and said that there is a possibility of the war.

Abdulhamid suggested that the person who tried to set a trap for Mahmud would definitely save Manyas and then soldiers moved out of the dungeons. Esref moved to restaurant’s kitchen but he saw that Armen had already captured the hidden weapons. In the last scene of Payitaht Abdulhamid episode 130, Ahmed headed towards dungeon to free Manyas, but he saw that someone else was there to rescue him. Tahsin was observing this situation from a hidden place and instantly went to Hunkar’s carpentry workshop. Tahsin revealed that the Grand Vizier had kidnapped Manyas.