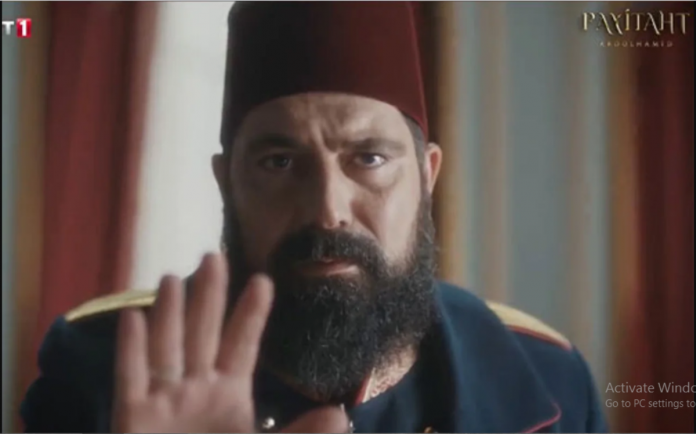 In Payitaht Abdulhamid Episode 150, Abdulhamid went to Esref Aziz’s funeral and prayed for him. When Hunkar returned to the palace, Tahir said he wanted to capture the traitor Pashas. Hunkar explained the plan to Tahir and Shehzade. Traitor Pashas said that they needed heavy weapons to save Mahmud and began to examine the boxes in the building’s cellar. Shehzade entered with the soldiers, but soon after, there was a huge explosion in the building. While Hunkar was trying to help Shehzade, Esad came out.

Hunkar asked for a report on the explosion and went back to the palace. Esad said he was there to catch the traitors, but Hunkar asked him not to do secret deeds again. Abdulhamid then called Tahir and asked him to follow Esad. As Selim was about to kill Mahmud, several people broke into the house and kidnapped both of them. Karasu went to where Mahmud was and said that Palmer planned everything.

Mahmud was very uncomfortable that Palmer was in Payitaht and asked Karasu to summon Sabahaddin. Necip told Hunkar that someone kidnapped Mahmud and went to the French embassy. Palmer spoke to an orphan boy and gave him money. Hussein did not accept the money he gave him at first but said he would later work for Palmer. Esad secretly went somewhere and told Palmer that he would send cannons from Anatolia to Canakkale to gain his trust.

Hunkar went to dine with the orphans and said he trusted them. While Esad was trying to find out where was Hunkar, the Vizier gave him documents about the cannons to be shipped. Esad immediately set out to bring these documents to Palmer. Tahir and Shehzade followed him. Tahir caught Assad while he was waiting to speak to Palmer. Hunkar’s car crashed into Hussein. Hunkar later visited Hussein but did not notice the weapon in his hand.

Others who are searching for watching Payitaht Abdulhamid Episode 151 English Subtitles free of cost, they need not worry as we have brought the solution. You may watch Payitaht Abdulhamid Episode 151 English Subtitles here, but there will be some ads too. Keep visiting historicales.com for all the updates regarding the TV series and Historical knowledge. Please click below button.