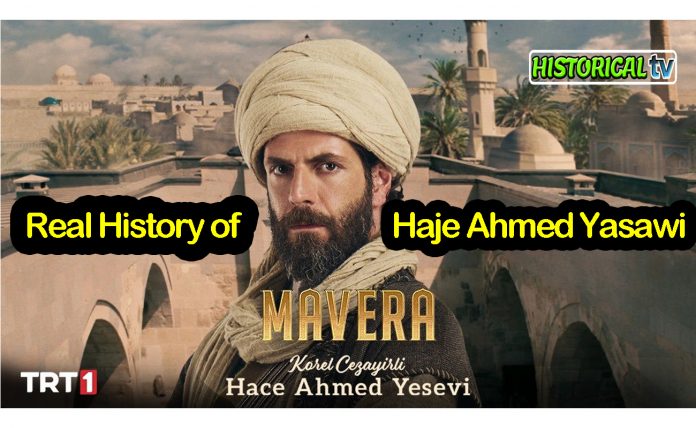 Ahmad Yesevi was born in Sayram in 1093. Ahmad Yesevi first lost his mother and then his father. Ahmad’s sister took him to the city of Yesi. When Ahmad Yesevi was seven years old, Arslan Bab found him and started to raise him. According to a legend, Arslan Bab came to Yesi to give the date he bought from the Prophet to Ahmed. Arslan Bab passed away one year after meeting Ahmad. Ahmed went to Bukhara as his first teacher Arslan said and found Yusuf Hemedani there.

Yusuf accepted Ahmed to the dervish lodge and started to teach him. After completing his education, Ahmed starts to tour cities in Turkistan at the request of his teacher and tells about Islam to the people there. People in Central Asia love Ahmed very much and become Muslim thanks to him. People started calling him Hace (Haje, teacher) because Ahmed was following the teachings of Muhammad ibn Hanafiyyah. Ahmed was a very talented person in poetry and singing and it is said that he made great contributions to Turkish folk literature.

Although Ahmed is not known for certain, it is said that he had two daughters and that many important people descended from him. With the influence of Sultan Sencer (Sanjar), Ahmed spread Islam to many places and led to the opening of many dervish lodges in Asia. Ahmed’s use of Turkish instead of Persian or Arabic, like other famous scholars of the period, made him popular among nomadic Turks in a short time.

Ahmed continued to write Turkish works and eventually wrote the Divan-i Hikmet (Book of Wisdom). This work is one of the oldest works of Turkish literature. In the poems he wrote here, Ahmed wrote the love of Allah, heaven, hell, the life of the Prophet, the miracles performed by the Prophet in a plain and understandable language. When Ahmed turns sixty three, he has an underground cell carved in the garden of the dervish lodge and lives here for the rest of his life. Ahmed lived a plain and poor life, and his only job was making spoons. Ahmed died in Turkistan in 1116 and Arslan’s son Mansur Ata took his place.

Ahmad Yesevi and his friends set out to go to the dervish lodge in Baghdad at the request of Yusuf Hemedani in the Mavera television series. Ahmed sees a nomad man and his family on the road. Ahmed saves this man’s family, but this event is just the beginning for him. Ahmed and his friends then travel to Baghdad, but Haje finds that the situation of the people in the city is worse than expected.

Ahmad Yesevi then goes to the dervish lodge established by his teacher, but Mervan does not welcome him. Ahmed later wants to set up a soup kitchen for poor kids, but the city’s merchants won’t help him. Even Vizier Atif becomes suspicious of his actions and thinks he is a bad guy. Meanwhile, Dubeys devises a plan to attack the city with the power from Dai and even kidnaps the caliph’s daughter. Ahmed rescues Asife, but this time, Atif throws him in the dungeon with fabricated crimes. Pehlivan and Mansur take action to save Ahmed, but unexpected events happen.