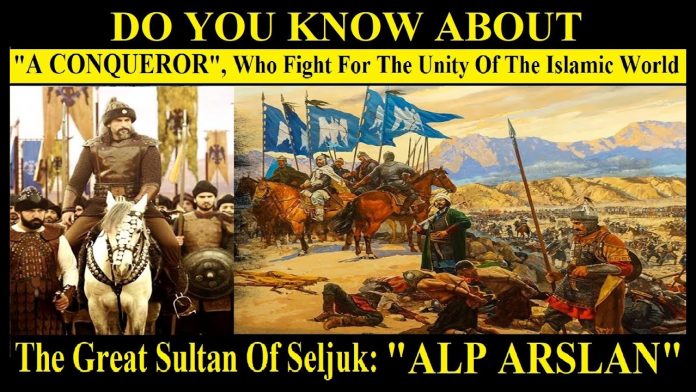 Alp Arslan is the son of Cagri, Khorasan governor, one of the founders of the Great Seljuk Empire. Alp Arslan means Heroic Lion in Turkish. Alp Arslan learned to use swords, riding horses, and shooting arrows from an early age. Alp Arslan participated in the Dandanaqan war with his own soldiers and proved himself with his skills. Alp Arslan realized how difficult the Seljuk Empire was in his youth and worked day and night to keep the state going. Fights for the throne began after Sultan Tughril’s death because Tughril had no sons. Before Tughril died, he ordered the ascension of Suleiman, one of Cagri’s sons. Alp Arslan and some statesmen opposed Suleiman’s leadership. Meanwhile, Tughril’s cousin Qutalmish attacked and tried to encircle the Seljuk capital. Realizing the magnitude of the danger, the viziers sought help from Alp Arslan. Alp Arslan killed Qutalmish and ascended to the Seljuk throne.

Alp Arslan organized another expedition on Georgia and restored security at the borders. Alp Arslan started preparations to bring peace and tranquility to Egypt and the holy lands (Jerusalem, Medina, Mecca). Alp Arslan as his first job passed through Byzantine lands and advanced towards Egypt. Alp Arslan easily eliminated his enemies and almost came to Damascus. Meanwhile, Alp Arslan, who learned that Romanos Diogenes was on his way to attack with a large army, canceled all his plans and returned to defend his homeland. Romanos Diogenes brought the entire Byzantine army to Malazgirt and prepared plans to remove the Turks completely from Anatolia.

The Byzantine army consisting of four hundred and fifty thousand people started fighting in Malazgirt in 1071 with the Seljuk army consisting of approximately one hundred and fifty thousand soldiers. The Byzantine army was generally composed of heavily armed foot soldiers, whereas the majority of the Turkish army was archers on horseback. Alp Arslan knew that Romanos Diogenes wanted to remove Turks from Anatolia and even destroy the Seljuk State. Alp Arslan sent an envoy to Romanos Diogenes before the war started and offered him peace. Romanos Diogenes, confident in the size of his army, refused this offer and started the attack.

The Byzantine army was quickly defeated and Romanos Diogenes was captured. As a result of this war, which had an important place in Turkish history, it was definitely proved that the Turks could not be driven out of Anatolia. After this great success, Alp Arslan struggled for the development of his country for years. Because of Karakhanids attacking Seljuk borders, Sultan Alp Arslan went to attack Berzem castle with his son Malikshah and Nizam al-Mulk. After the war, Alp Arslan wanted to talk to the commander of the enemy castle. While Alp Arslan was speaking mercifully, the treacherous commander assassinated Sultan Alp Arslan with a poisoned arrow he had hidden in his hand and killed him. After this unfortunate death of Alp Arslan, his son Malikshah ascended the throne of the Great Seljuk Empire.