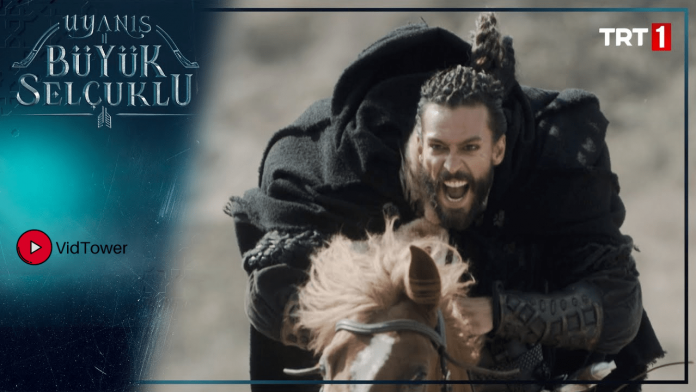 In the first scene of Uyanis Buyuk Selcuklu episode 11, Andreas tried to arrest Sanjar, but the Turks ran away from the castle like a wind and went after Yorgos. Elcin reached the palace and brought the traitor with her which she had caught. Melik Shah realized that Qasim was a betrayer and he had helped Byzantines. Yorgos met Qasim and requested his help to head towards Constantinople.

Qasim welcomed the offer and set off with Yorgos. Melik Shah commanded Bozan to arrest Qasim and declared that the replacement of Qasim would be Ghazi Hassan. Elcin paid a visit to Seferiye and had a discussion with Gevher. The Fatimids were setting the trap for Yorgos in order to take relics. Sanjar and Bozan arrived while Fatimids launched attack on Yorgos. Yorgos and Fatimids saw them and launched the attack on Turks. As Behram realized that he was at the loosing end, he immediately escaped. Meanwhile Yorgos was left alone and tried to run away, but Sanjar came after him.

Sanjar attacked Yorgos, killed him and the relics were retrieved by him. Bozan murdered Qasim and headed towards palace to share what had happened. Gevher doubted that something is wrong with the lamps in Seferiye’s room and told Tapar about this. Melik Shah was waiting for Sanjar to come back to palace, but the Byzantine diplomat suggested that he must be caught due to the murders. Regardless of the objections of his mother, Sanjar declared that he plans to bring the relics to palace and then to leave. Elcin and Tapar delivered the order to remove the lamps from Seferiye’s room, but Terken had already replaced the poisonous oil lamps.

On the other side, Melik Shah camouflaged and had a private meeting with Christians in a market. In the last scene of Uyanis Buyuk Selcuklu episode 11, Sanjar arrived at palace and declared that he would deliver the relics only to Melik Shah. Melik had taken the relics from Sanjar and thanked him. Terken held Sanjar responsible for all that happened at that time. Melik Shah declared that there was no evidence that can prove Sanjar guilty. Finally he commanded the arrest of Sanjar to provide him with the chance of fair trial.