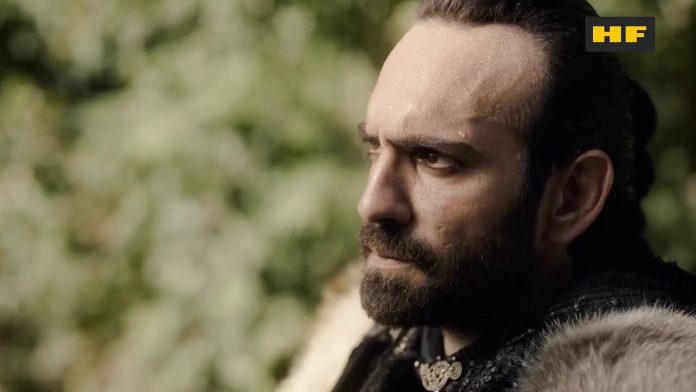 In the first scene of Uyanis Buyuk Selcuklu episode 16, Melik Shah killed Andreas and headed towards Kuvel castle. The Byzantine prince told Melik Shah that the Emperor desired to make a peace treaty and presented a hundred thousand gold coins to him. Melik Shah told the prince to kneel in front of him and gave him his terms for the peace settlement. On his way to the palace, Melik Shah got attacked by Markus and Christian soldiers. Hassan saved the life of Melik Shah. Arslantas exclaimed how he managed to arrest Rustem and then Tapar sent everyone into the dungeon.

As Melik Shah arrived at the palace, he called Hassan and Tajul. Melik Shah was extremely angry with them and slapped them because of their faulty intelligence. Melik Shah summoned Arslantas and Sanjar. Sanjar revealed the information about the secret book and Melik Shah gave him the last chance. Hassan got informed about the whereabouts of the book from Rustem and sent his men to fetch that book.

Nizam made an investigation about the attack in the forest and realized that the crusader army of Europe was the culprit. Melik Shah got information about the actions of Faysal and was angry with Itebar. Sanjar searched for the secret book with his men all day and night. On that night, Hassan and his followers observed a ritual. On the other side, Melik Shah interrogated Rustem. Sanjar went through all the traps that were set to trap him and continued looking for the book.

The next morning, the preparation was going on for execution that has to take place in the courtyard of the palace. The soldiers brought both Arslantas and Rustem in the courtyard. At first, Melik Shah ordered the execution of Rustem. After that, he ordered to remove the ropes of Arslantas and expressed that he would live with the shame throughout his life because of his actions. Quietly, Arslantas left the palace. Elcin told Melik Shah that Terken attempted to kill Nizam and Seferiye. Melik Shah summoned Terken and interrogated her. In the last scene of Uyanis Buyuk Selcuklu episode 16, Hassan started finding the book and found it. Sanjar went after him and caught him immediately as he was about to set off with that book.