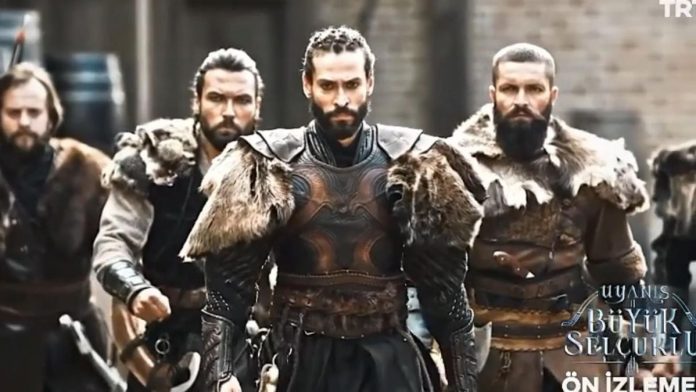 In the first scene of Uyanis Buyuk Selcuklu Episode 22, Tekish expressed that Sefriye was discussing Basulu and Sultan might have a secret son. Melik Shah got angry after hearing that and Tapar thought that his mother was still alive. Later, as Sultan learned that the material that was sent to him got stolen, he got angry with Zubeyde. At the same time, Terken got information that the bows required for catapults got stolen, he ordered Tajul to get them back. So, Tajul left and met with Hassan but he got nothing. Hassan stabbed Tajul and injured him. Then he sent him to the palace.

Faysal provoked the Itebar’s servant at his father’s request and Erbatur. He demanded money for the soldiers from Turna.  As Albert escaped from the dungeon, he found Markus. Markus shouted that Albert was a traitor and attacked him. Melik Shah was secretly following Albert and he had taken back the supplies from Markus. Albert was given freedom as he had helped the Sultan’s plan. Episode 22 is found below

Sanjar brought all the material to the plain then kept it inside the newly established workshop. Melik Shah made Tapar the manager of the workshop and he started to work there. Tapar asked a soldier to check his mother’s grave. Hassan’s spies informed him about the location of the workshop and he conveyed this message to Markus. Erbatur had a meeting with the soldiers and asked them to create a riot. Livya shot randomly from a distance and started the war between the soldiers. Erbatur and the rebellious soldiers attacked Turna’s house. Sanjar arrived while Turna and Basulu were fighting the rebels. Sanjar arrested all the rebel soldiers and executed them.

Melik Shah met Tapar at the workshop and made a sword with him. The Sultan exclaimed that the sword was designed for the future child of Tapar. As Melik Shah left the workshop, Markus arrived there and attacked. He killed the Turks and had a fight with Tapar. The Christian soldiers injured Tapar and Markus killed him. In the last scene of Uyanis Buyuk Selcuklu episode 22, Sultan learned of the attack on the workshop. He immediately went to the workshop but when he arrived there, Tapar was already killed.