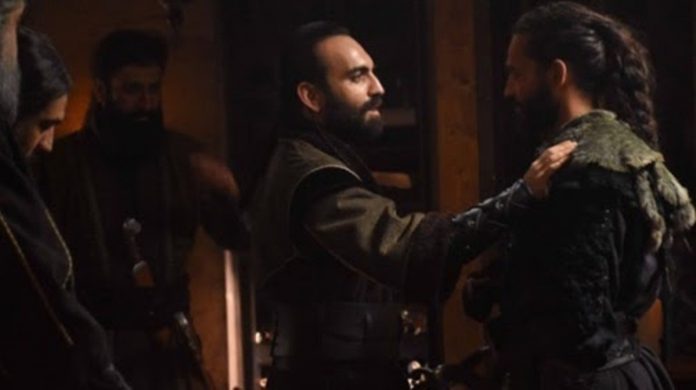 In the first scene of Uyanis Buyuk Selcuklu episode 24, Melik Shah arrived at the palace after killing Markus and had a conversation with his son Tapar. Sanjar declared that he would marry Turna soon and sent an invitation to the Nizam. On the other side, Tekish summoned the Turkmen Beys to the hunting tent and provoked them against the state, but the Beys were not in agreement with him. Prince wanted the holy spear back so he invited Sultan to have a meeting with him.

Tapar, Basulu and Nizam went to the Kinik plain for attending the wedding of the Sanjar. Sanjar and Turna got married and after a while, Tekish arrived. Tekish started arguing with Sanjar, but Tapar sternly asked him to leave them plain. Sultan had a meeting with the Prince but he rejected his offer of three chests of gold. Melik Shah demanded from the Prince that he needs to withdraw from the places occupied in the Black Sea, but he refused. After that time, Prince had a meeting with Hassan and he planned to harm Melik Shah by attacking the procession that was leaving for pilgrimage.

As Tajul was protecting the procession that was on the journey for the pilgrimage with the order of the Sultan, the soldiers of Prince attacked. They killed all of them and Tajul got seriously injured. Melik Shah learned about the attack and inquired Tajul about that. Terken realized that Tajul was unable to do any more research on Basulu and she took over that task. Tapar kept on thinking that Basulu was still alive. In reaction to that attack, Melik Shah ordered to send the Turkmen around the Kuvel fortress and gave the sacred spear to Sanjar in order to return it to the Prince.

On the other side, Arslantas saved the life of Livya and brought her to the plane for her recovery. As Prince got the holy spear back, he became contented and kissed it. The venom on the spear slowly killed him. In the last scene of Uyanis Buyuk Selcuklu episode 24, Sanjar and Basulu got the private message that was sent by Nizam and went to meet him at the secret place. As they reached there, they found Tapar instead of Nizam. Tapar revealed to Basulu that he had the information about everything.