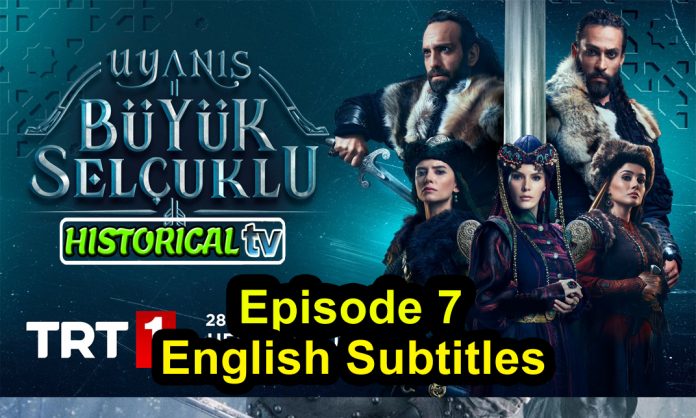 Sanjar shot Ghazali in the heart with an arrow and immediately ran away. Hassan Sabbah asked Nizam about the assassination. Elcin refused Qasim’s marriage proposal and got very angry. Behram said that Sanjar and Arslantas would see Dai very soon. Yorgos and Commander Andreas secretly devised a plan to get the relics from the Fatimids. Sanjar returned to the plain and killed the spies who attacked the Turks. Hassan said Ghazali’s books were in Khayyam’s house, but Dai ordered him not to do anything.

Terken Sultan assigned a servant to follow Elcin. In Uyanis Buyuk Selcuklu Episode 7, Elcin went to the market and spoke secretly about Kilij with a merchant there. The maid sent by Terken learned of these secret conversations and immediately informed Terken. Hassan thought that Ghazali wasn’t dead and moved to search for him. Tajul Mulk caught the merchant in the market and ordered him to work for the Seljuk Empire. Sanjar met with Turna and told her that there should be nothing between them. Turna tried to oppose Sanjar, but Sanjar did not change his decision.

Hassan’s spies prepared to start a fire in the house while Ghazali and Khayyam were talking about the stars. Hassan disobeyed Dai’s order and burned Khayyam’s house. Hassan thought he burned Ghazali’s books, but he was surprised to see Ghazali leaving the house alive. The next day Behram made preparations to take Sanjar and Arslantas to a secret place. Meanwhile, Hassan Sabbah met with Dai and said that Ghazali was still alive. Dai got angry with Hassan but realized that Sanjar was a traitor. To save her brother Kilij, Elcin met the merchant at a secret place in the forest and went to where her brother was. Sultan Melik Shah sent his son Tapar to save the holy relics and Sanjar.

While Sanjar and Arslantas were waiting to meet with Dai, Behram came back and tried to kill them. Meanwhile, Seljuk spies came and helped Sanjar. Elcin went to where her brother Kilij was and knocked out the guards, but when she opened the door, Sultan Melik Shah appeared in front of her. Sanjar followed Bahram to retrieve the relics and fought with him. Yorgos eventually came out of hiding and said he would avenge his dead brother from the Sanjar. Tapar and Seljuk soldiers started searching for the Sanjar and the relics. Sanjar and Yorgos fought for a long time, but Sanjar was heavily injured. Yorgos threw Sanjar off a cliff.