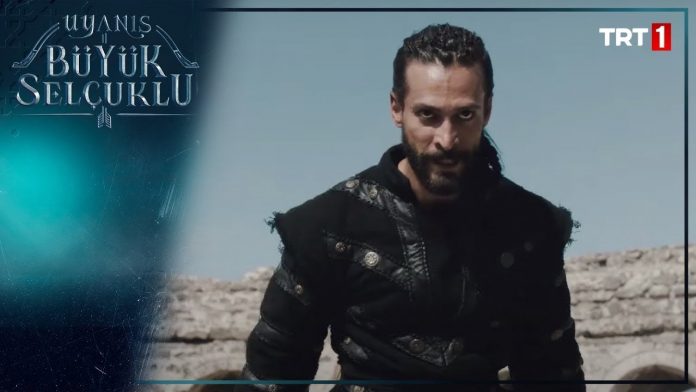 In the first scene of Uyanis Buyuk Selcuklu episode 13, Arslantas shot Sanjar with an arrow and injured him. After that he followed Rustem, caught him and revealed that he was his long lost brother which he had lost many years ago. Rustem didn’t believe him and Behram took them to the Dai’s place. Dai told them that Nizam had been lieing to Arslantas for many years and then knocked him out using the incense in the room. After speaking to Nizam, Elcin invited Turna to the palace.

Hassan desired to launch bomb attacks by using barrels that would delivered from Byzantine land. Hence asked Behram to meet Andreas and persuade him. Andreas was in full agreement with the plan and he secretly kept the explosives inside the fish barrels of a merchant. The Turkish spies in the castle conveyed this news to Melik Shah, but Hassan saw that. He immediately sent Rustem to seize the explosives. Elcin had taken Turna to the room of Seferiye and asked her to hold an examination.

Turna declared that Seferiye was poisoned and then left the palace to examine the oil of the candle. Melik Shah announced a curfew to prevent public from getting any harm. Arslanta’s woke up from his sleep and saw his mother standing Infront of him. His Mother held Nizam responsible for everything and expressed that Fatimids were behind all of this. Then Dai arrived and got in conversation with Arslantas. Sanjar composed a letter to the newly appointed Caliph using the name of new Dai, in which he wrote that he will catch the new Dai. Melik Shah had ordered the steel that arrived at Shalamzar.

On the other side, Nizam arrested the soldiers of new caliph and made a plan to arrest the new Dai. While Hassan was about to order the setting up of explosives, he got a message and went to forest to see Caliph’s men. In the last scene of Uyanis Buyuk Selcuklu episode 13, Dai was wearing an iron mask and approached the soldiers of Caliph. Suddenly Nizam ordered the soldiers to launch the attack and then lifted the iron mask of Dai to find Arslantas beneath it. Arslantas had taken out his knife and then he attacked Nizam with it in order to take the revenge for all the harm he had done to his family.