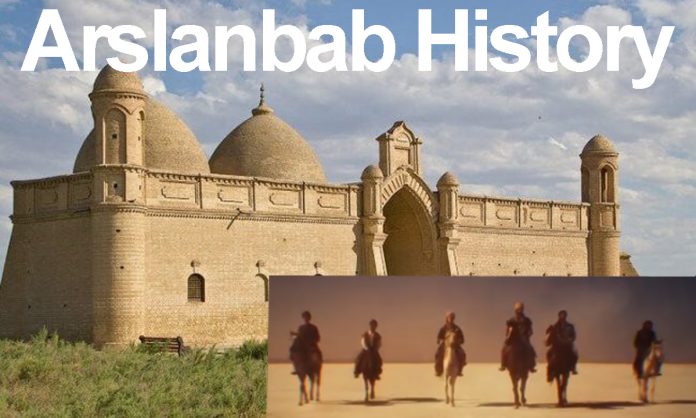 The exact date of birth and death of Arslanbab is not known, but there are many rumors about his personality and actions. The biggest rumor about Arslanbab is about dates. it is also said that One day, the Prophet Muhammad (PBUH) and His followers get hungry on their way to war. Jibril (Gabriel) brings a plate of dates to the Prophet, but some of the dates fall to the ground. Gabriel says that these dates are the fortune and share of Ahmed Yesevi. Upon this, the Prophet asks who will take these dates to Ahmed, and Arslanbab wants this task. Arslanbab then starts looking for Ahmed and centuries pass.

Arslanbab goes to Turkistan and finds Ahmed. Ahmed Yesevi, on the other hand, was still an orphan at that time. Arslanbab gave lectures to Ahmed on science, education, and religion. Arslanbab somehow realizes that he will die after completing his mission and asks Ahmed to go to Bukhara. Arslanbab asks Yesevi to find Yusuf El-Hemedani, the famous scholar and teacher of that time, and become his student. Arslanbab passed away after a short while and Yesevi set out for the city of Bukhara to fulfill the wishes of his teacher. Years later, Ahmed wrote his famous work Divan-i Hikmet (Book of Wisdom). Ahmed said in a chapter of this book that he met Arslanbab when he was seven years old and he took Mustafa’s (the Prophet) trust from him.

Apart from these, it is known that Mansur Ata, a friend and student of Ahmed Yesevi, is the son of Arslanbab. Mansur Ata took lessons from his father Arslanbab at a young age and grew up with the education he gave. Mansur Ata later became one of Ahmed Yesevi’s first students and spent most of his life with him.

Arslanbab’s name is frequently mentioned in Mavera television series. Ahmed Yesevi always says good things about Arslanbab and says that he is such a good person because of what he has done. In addition, another character in the series was raised by Arslanbab is Pehlivan Hamza. Pehlivan talks about the training he received from Arslanbab and how he showed him the right way. Arslanbab’s son Mansur is still young, but he goes on a journey to Baghdad with Ahmed.

Mansur wants to be a hero and scholar like Ahmed Yesevi, but Ahmed tries to keep him away from all dangers. Even though Mansur Ata is upset about this situation, he does what his teacher Ahmed wants. The most important thing Ahmed wants from Mansur is to write stories and diaries. Ahmed asks Mansur to write about all kinds of good and bad things that happened to him. Mansur accepts this task and begins to write every place he goes, all the stories he listens to, and every event that happens to him at the request of his teacher.