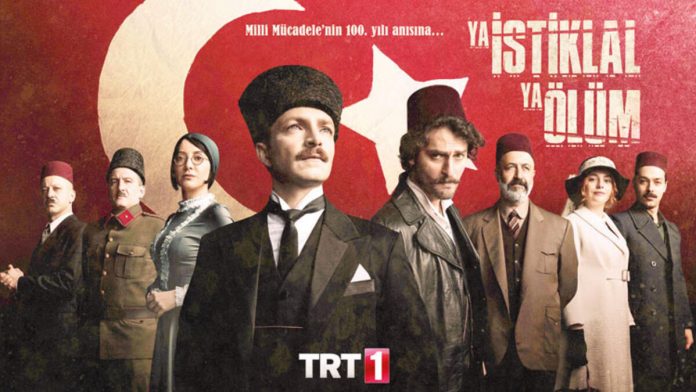 The Assembly is undergoing renovation, but the tiles to be used for the roof are finished. Damat Ferit writes a message to Ryan and Anzavur comes to the mansion at this time. Damat Ferit gets angry with Anzavur because he lost the war and left all the weapons and ran away. Anzavur tries to explain what happened. Damat Ferit tells him to go back to work after he is healed. After Anzavur leaves the mansion, one of his assistants tells Ferit that he has something to see. As Damat Ferit leaves the room, Galip takes several documents from his desk. A doctor examines Nazan and tells her family that she has tuberculosis. In Ya Istiklal Ya Olum, Ferit goes somewhere and sees a banner telling people that they have to fight. Damat Ferit orders that this poster, which tells him that he is a traitor, is removed immediately. Mustafa Kemal and his deputies discuss how the new assembly will work. Mustafa Kemal argues that legislative and executive powers should not be separated. After all discussions, Mustafa Kemal Pasha’s opinion is unanimously accepted. Ali Riza learns that Sagir has been arrested but he has not spoken despite all the torture. While Mustafa Kemal and his friends plan about Bolu, Mustafa Kemal touches his eye with a handkerchief. His friends ask what happened and Mustafa Kemal tells them what happened in Tripoli.

Ya Istiklal Ya Olum Trailer

Nazan talks to her nanny and persuades her to meet Galip. Mustafa Kemal gets the news of the British landed soldiers to Trabzon and the people rebelled against them. Mustafa Kemal orders soldiers to stop the rebellion from spreading further in Bolu and Carsamba. A commander comes to Husamettin and asks him questions in the cell. Husamettin tells him that he is innocent and the commander secretly gives him a piece of paper. Husamettin secretly reads this paper and learns that he needs to be prepared for what he has to say in court. Mustafa Kemal meets with deputies and talks about the name of the new assembly. After short discussions, Mustafa Kemal says that the name of the assembly should be short and understandable and he proposes to the Grand National Assembly. Meanwhile, people remove tiles from their homes and bring them for the renovation of the assembly. Mustafa Kemal says that on the 23rd day of April, the Grand National Assembly will be opened in Ankara right after the Friday prayer and they will pray before the opening. Mustafa Kemal says that celebrations will be held all over the country due to the opening of the assembly.

Nazan’s nanny cannot speak to Galip because of Hikmet and tells this to her. British soldiers question the employees at the Istanbul telegraph center once again, but nobody talks. Galip has to leave the mansion because he said things that Damat Ferit doesn’t like. Topkapili gets angry when he learns this. In Ya Istiklal Ya Olum, There is no other option for Galip other than going to Ankara. Topkapili says he will help him. Deputies are very excited because the parliament will be opened. Bennett goes to a British ship and talks to Sagir. Bennett tells Sagir that he will be back in the game and what to do. Sagir listens to Bennett and takes the weapons necessary for Mustafa’s assassination. Damat Ferit suspects Galip and asks questions about him. Hikmet cannot answer questions about Galip and Damat Ferit calls Hikmet’s daughter. Mehmet Akif comes to Ankara and talks to Mustafa Kemal. Topkapili’s friends begin to arrest. That’s why Topkapili meets Pandikyan and blames him. Pandikyan says that he has not betrayed and still helps him. Topkapili learns of the new powers received by the courts.

Husamettin says he wants to meet with court president Nemrut Mustafa Pasha and will give him confidential information. Ali Riza meets Sagir in a restaurant. Ali Riza says that he knows everything and regrets it. Sagir says that the British will not leave him alone anymore and will do everything to go to Ankara. Ali Riza says that he will give him what he needs. The soldiers take Husamettin and take him to Nemrut Pasha’s room. Husamettin tells that he will give only him the information, and then Nemrut Pasha takes his soldiers out of the room. Husamettin reminds him of the task Nemrut Pasha took in the special organization because of his request in the last years of the first world war and says that he worked at his house upon the order of Enver Pasha. In Ya Istiklal Ya Olum, Husamettin says that he will be judged because of being a member of the organization and therefore Nemrut Pasha should also be tried. Husamettin says he has evidence to prove this. Nemrut Pasha frees Husamettin. Nazan comes to Damat Ferit’s room. Ferit begins to ask questions about Galip. Nazan says how she met him and loved him. Later, Nazan tells that she lied to her father to find a job for Galip. Nazan gets sick again and Damat Ferit sends her home.

Nazan goes to Galip’s house instead of her own. Galip’s mother gives her the message left by Galip. Galip tells her that he has to go to Ankara in order not to be exposed, that he will always love Nazan, and wait for her. Husamettin and Osman are released from prison. Robeck learns that Mustafa Kemal Pasha opened the assembly in Ankara. Mustafa Kemal and the deputies walk to the parliament together with the people by praying. When they come to the assembly, they pray once again to Allah, and Mustafa Kemal Pasha officially opens the Grand National Assembly of Turkey. We have found one free source of watching with English Subtitles, Click here

Ya Istiklal Ya Olum English Subtitles free of cost is below