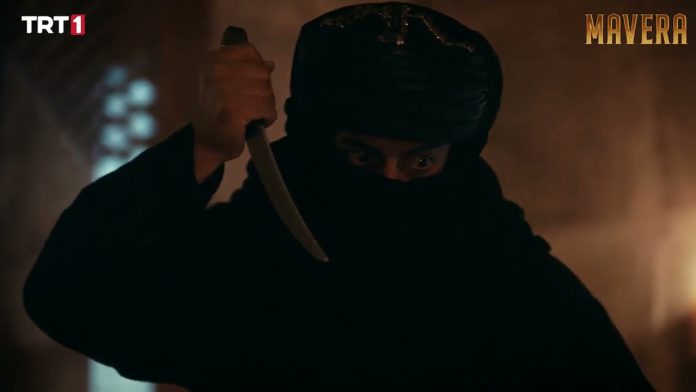 In the first scene of Mavera episode 3, Ahmad got attacked by someone while praying but Saltuk saved him. On the next day, Ahmad started his investigation to find out who was that attacker. Atif got angry that his plan did not work and Dai came and asked the attacker to kill himself. Later, Atif blamed the leader of thieves Sahsuvar and declared that the attacker died due to loss of blood. Meanwhile, Khwaja had started a conversation with Caliph informed him that the attacker’s wound was small.

Atif had a disagreement and expressed that the actions of Ahmad were wrong. Pehlivan realized that the necklace around the attacker’s neck was basically a lockpick, and he told Ahmad. Saltuk found Sahsuvar and inquired why he attacked Khwaja, but Sahsuvar denied the allegation. At the same time, the soldiers sent by Atif arrived at the Sazlik neighborhood and said they have planned to arrest Sahsuvar. Some nomads arrived at the derby and checked if Ahmad was fine.

Mervan expressed that Ahmad and his friends were solely responsible for the events that took place inside the lodge, but Khwaja stated that the door of the lodge is open for all. Ahmad then called all the dervishes to have a meeting. Ahmad started shouting that Prophet and his companion Abu Bakr had escaped the attacks and taken refuge inside a cave. Khwaja added that Abu Bakr had blocked all the holes of caves by tearing pieces of his clothes in order to protect the Prophet.

Later, Ahmad said that the brotherhood was very significant. That night, Ahmed dreamed of Hamdani. Hamdani was speaking to Ahmad and asked him not to give up on helping the people of Baghdad and gifted him a wooden sword. After he woke up, he got out and had started to cut a tree. Ahmad had taken that tree to the workshop of carpentry and worked for all night to design a wooden sword. In the last scene of Mavera episode 3, Sahsuvar and his men were robbing the houses of rich people and the stores of the market. At the same time, Sahsuvar went after Ahmad and arrested him.