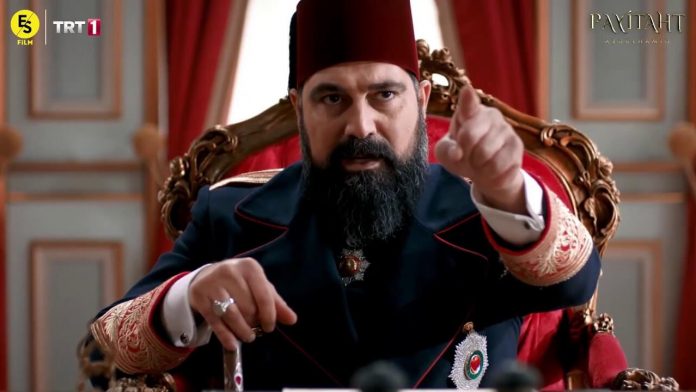 In the first scene of Payitaht Abdulhamid epsiode 127, Bidar is shown using the medicine and she got poisoned. After listening to Ahmed, Tahsin arrested the doctor. Ahmed and Manyas had a meeting and they discussed Ismail with each other. Before going to Thessaloniki, Manyas asked the arrested doctor to put all the blame on Ismail. Meanwhile Abdulhamid became conscious and opened his eyes. He asked Tahsin what had happened. The Masons arranged a secret meeting in Thessaloniki and signed an agreement to construct a huge lodge. Abdulhamid made a visit to Bidar and had a meeting with Tahsin again.

On the other side, Esref launched an attack on a warehouse and came to find rifles that were smuggled into the country. Esref continued his search and realized that Armenian had minted the money. Abdulhamid expressed that he only trusted Tahsin and Hakki in his palace. Ahmed reached palace and gave explanation to Hunkar about his activities. Esref Aziz was looking for the fake Armenian state’s money. Abdulhamid commanded the warriors of the Ertugrul regiment to follow the commands of all Pashas except Mahmud. Tahsin tested Mahmud to make sure if he was sick and then had a discussion with Abdulhamid.

Sabahaddin and Karasu were able to convince Talat to work for Masons. Talat discussed his ideas with them and Karasu informed him about the place where he had to go. Esref had a discussion with Vahap regarding printing machinery. Abdulhamid called Pashas and instructed them to have a meeting with grand vizier. After having discussion with Tahsin, Abdulhamid called Mahmud and exclaimed that he trusted him. After a while, an arms dealer who worked for Hunkar came and informed that some weapons were found missing. The merchantman told that he had found an address. Tahsin had seen the address and realized that the address was of Selim’s house.

Ahmed conveyed to grand vizier that some students got visa for UK and this could be dangerous. Grand vizier listened all that Selim had to say and issued the order to arrest the students. When students came to know that they would be arrested, they went to the British cemetery. The cemetery was recognized as the land of Britishers due to an agreement. In the last scene of Payitaht Abdulhamid episode 127, Ahmed went there to arrest students but was not allowed to enter cemetery. Student that were inside the cemetery started to give insulting remarks to Ottoman soldiers and Abdulhamid. Ahmed became very angry when he listened what students were saying and opened fire on the students. Hechler, Isaac and journalists observed all of this.