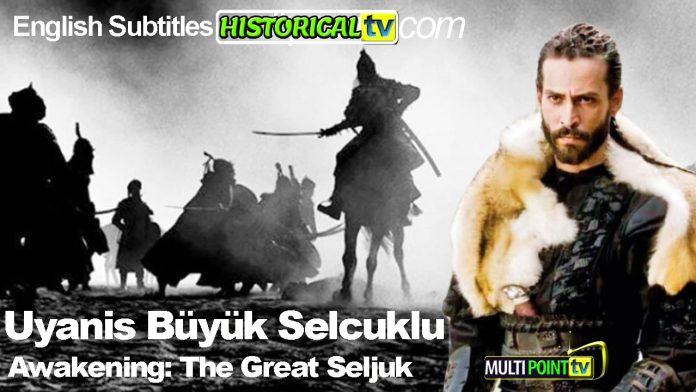 Another new historical drama after Dirilis Ertugrul, Filinta, and Payitaht Abdulhamid. (Uyanis: Buyuk Selcuklu) Awakening: Great Seljuk. After the death of Sultan Alparslan, who won the Battle of Manzikert and opened the door of Anatolia to the Turks, Malikshah took the throne. The young Sultan Malikshah spent his youth fighting alongside his father and taking lessons from the famous vizier Nizam al-Mulk. A variety of obstacles and difficulties confronted the newly enthroned Malikshah. He had to confront his uncle Qavurt first and then the Karakhanids in the east. Later, the Karakhanids and Ghaznavids united and attacked the Seljuks, but Malikshah defeated them and dominated Anatolia again. Seeing the power of Sultan Malikshah, neighboring states stop fighting the Seljuks after this date and try to get closer to them. Malikshah, who ascended the throne at the age of seventeen and ruled for twenty years, had only one goal: to gather the entire Islamic world under one flag. Shortly after, Nizam al-Mulk was killed by Isma’ilis assassins on his way to Baghdad. This incident deeply saddened Malikshah. The death of Nizam al-Mulk created new problems within the state and led to Malikshah to be killed by poisoning.

The new television series, which will be broadcast on September twenty-eight, will show the most brilliant period of the Seljuk Empire, the wars, and the internal structure of the state to the audience.

The characters we will see in this new television series and the actors who will play them:

Bugra Gulsoy (Sultan Malikshah): He will be the star of (Uyanis: Buyuk Selcuklu) Awakening: The Great Seljuk and will portray Sultan Malikshah. Experienced film and theater actor, Bugra has been involved in the arts from a young age. The thirty-eight-year-old actor has appeared in popular television series such as Kuzey Guney, Fatmagul’s Sucu Ne?, Mahalle, and Ask Yeniden.

Ekin Koc (Ahmad Sanjar): He is the son of Sultan Malikshah. Ekin, the handsome actor who is twenty or eight years old, previously played in Muhtesem Yuzyil (The Magnificent Century) series and played Ahmed I.

Hatice Sendil (Terken Hatun): She is the wife of Sultan Malikshah. The famous artist has previously appeared in numerous television series and movies. Some of those; Kurtlar Vadisi: Pusu, Yeni Hayat, Eylul, Karadaglar, and Dila Hanim.

Gurkan Uygun (Hassan Sabbah): He is the founder and leader of The Order of Assassins. Hassan Sabbah promises heaven to the soldiers under his command and gives them drugs. Hassan Sabbah, who has complete control of the soldiers, takes over the Alamut fortress and sets up an assassination squad there. The character of Hassan will be played by Gurkan, whom the audience recognizes as Halil Halid. Gurkan recently appeared in the TV series Payitaht Abdulhamid but worked in much different television series in his career. (Kurtlar Vadisi, Fatih, Kehribar, Kacak, Muhtesem Yuzyıl (The Magnificent Century), Deli Yurek, and many more)